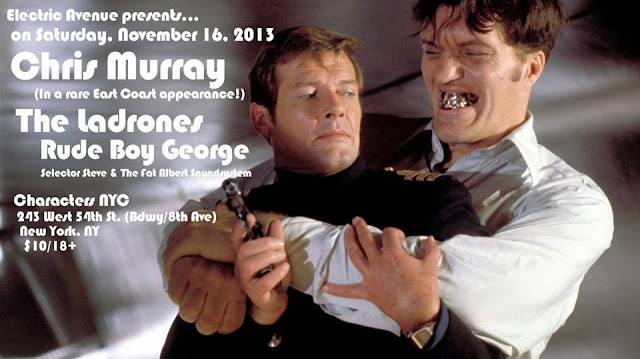 Here's my shameless plug for the next Electric Avenue show with Chris Murray, The Ladrones, and Rude Boy George on Saturday, November 16, 2013!

Rude Boy George--the band I'm privileged to be part of--does ska and reggae covers of New Wave classics and we're continuing our fall residency at Electric Avenue and should have some totally awesome new covers in our set (the crowd at our last show went crazy for our just unleashed versions of Berlin's "Metro" and Talking Heads' "Psycho Killer"!). To paraphrase Johnny Slash, "Ska-punk? No way. We're new wave ska. Totally different head. Totally!" (the relevant video clip you want is around the three minute mark here). We're fun. Come see us.

The Ladrones ("thieves" in Spanish) are a super-tight, horn-heavy NYC band with a brand new digital album full of anthemic, sing-along ska-punk tunes called Bestias del Chaos (available through their Bandcamp page). We've heard nothing but great things about their electric live show. Bring your ear plugs and be ready to dance.

I had the honor to work with Chris Murray back in the 1990s, both when he was a member of the incredible King Apparatus (their 1991 debut album is an early 3rd Wave ska classic--read my appreciation of it here--it should be in everyone's collection) and then when he struck out on his own as a one man ska band (his 1996 debut, lo-fi solo album, The 4-Track Adventures, highlights Murray's prodigious songwriting skills, which are presented in all their stripped-down-to-the-bone glory; it took a lot of lobbying Bucket to put this one out, but I'm so glad he did). Chris has released a slew of solo records since then (4-Trackaganza!, Raw, Slackness, Yard Sale), plus one with The Chris Murray Combo (Why So Rude). This is a very rare New York City appearance for Chris Murray, so definitely make sure to come out and see his fantastic acoustic set (which, by the way, will be the second ska acoustic Electric Avenue has presented, following Roddy Radiation's and Lynval Golding's performance over the summer).

Hope to see you there!