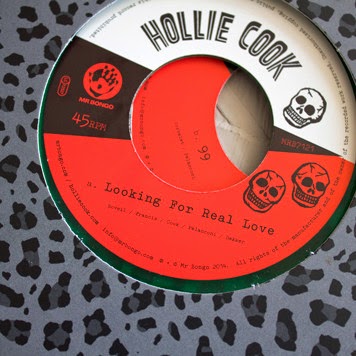 East Coast and Midwest fans of Hollie Cook (ex-member of the reformed Slits, frequent Prince Fatty collaborator, daughter of Sex Pistol drummer Paul Cook and Culture Club backup singer Jeni Cook, and goddaughter of Boy George) can mitigate their disappointment over the fact that her only US gigs this summer have been in Southern California by picking up a copy of the first single off her excellent--if dark--new album Twice.

While I would have chosen the slightly more upbeat "Desdemona" as the lead single, "Looking for Real Love" is a great Lovers Rock track that features smile-inducingly awesome disco-era strings, though its lyrics concern shaking off a man who left her--a positive development, really, since he wasn't her true soul mate ("You never could give me what I need/And you're gone, I am able to receive/I'm gonna stitch back the pieces together/Never look back, no, no never..."). The surf sounds and very 60s spy movie string intro to the deadly cool and rootsy "99" suggest exotic, picturesque places filled with intrigue and drama, but the song is about the singer finding herself abandoned, alone and lost, haunted by--and pining for--the better times when she and her lover were in paradise together.

Since it's been a few years since Cook's fantastic debut album (reviewed by us here) and she's appeared on several other releases in the meantime (like the amazing Prince Fatty vs. Mungo's Hi-Fi), I'd forgotten how (thanks to producer Prince Fatty) the dazzling sheen of her lush "tropical pop" is the vehicle that delivers some truly bleak and despondent lyrics about wrecked or dysfunctional romantic relationships. While there is great beauty in sadness (and a sad, beautiful woman is an object of great fascination), here's hoping that she can find more rays of light to sing about amidst all the darkness.