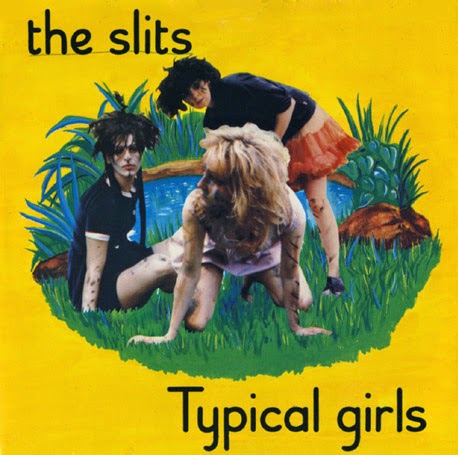 Over the summer, while rummaging through the bins at my favorite (and undisclosed!) used record shop, I came across the 12" version of The Slits' 1979 debut single ("Typical Girls" b/w "Heard It Through the Grapevine") for $15. For whatever stupid reason (wasn't feeling flush with cash that day?), I didn't grab it, but when I got back to work, I listened/watched videos of both tracks--and was particularly taken with their ragged, punky-reggay-ish cover of Marvin Gaye's hit (where Ari Up sometimes sings: "I heard it through the bass line..."). So, I checked Discogs and found that picking up a copy of this single (and I wanted the 7" version) from any US sellers would cost a pretty penny (let's just say that the $15 price at my favorite record haunt was very reasonable).

I now very much wanted this record.

I ended up being outbid on two separate eBay auctions, but finally stumbled upon a mint (!) copy of the 7" single that I was able to "Buy Now" for $20 (including shipping!)--which has a sleeve that folds out into a poster of Pennie Smith's photo that was used for The Slits' debut album, Cut (Smith also shot the cover of this single).

To be honest, I really didn't take to The Slits back when I was first introduced to them through Jon Savage's incredible and absolutely essential 1992 book "England's Dreaming: Anarchy, Sex Pistols, Punk Rock, and Beyond" (which led me to discover and buy albums from dozens of punk and post-punk bands) and catching the punk segments of the surprisingly good 1995 PBS/BBC documentary series "Rock and Roll: An Unruly History" (watch part of the punk segment that highlights roots reggae's relationship to 1970s UK punk rock and features interviews with Johnny Rotten, Paul Simonon, Don Letts, Mick Jones, Ari Up, Bunny Wailer, Mikey Dread, and Lee "Scratch" Perry here and here). But I get them now.

I'm in the midst of reading Slits' guitarist Viv Albertine's superb and brutally honest autobiography "Clothes Clothes Clothes Music Music Music Boys Boys Boys" (watch a recent interview with Albertine from Britain's Channel 4 here). One of the many great bits of info she shares is how her final break-up with Mick Jones of The Clash, whom she had dated on and off for years, led Jones to write "Train in Vain," which turns out to be an answer record to The Slits' "Typical Girls" (The Slits: "Typical girls stand by their man"; The Clash: "You say you stand by your man/Tell me something, I don't understand/You said you loved me and that's a fact/And then you left me, said you felt trapped/Well some things you can't explain away/But the heartache's in me till this day/You didn't stand by me/No, not at all/You didn't stand by me/No way"). Of course, "Typical Girls" lists all the "acceptable" behaviors imposed on women by 1950s and 1960s Western societies (and reinforced by their media)--and was everything that The Slits were defying and attempting to obliterate in the late 70s. It's smart, cheeky, and ironic feminist commentary, as well as an apt Slits mission statement--and it's made somehow all the more stinging and poignant by Jones' wounded reply to it. He wanted/expected the stereotypical 1960s girlfriend, but got one of the original riot girls instead.

It's very much worth it to check out the lyrics to this song--as, 35 or so years on, our male-dominated world still holds many of these same attitudes towards women...

Who invented the typical girl?
Who's bringing out the new improved model?
And there's another marketing ploy
Typical girl gets the typical boy