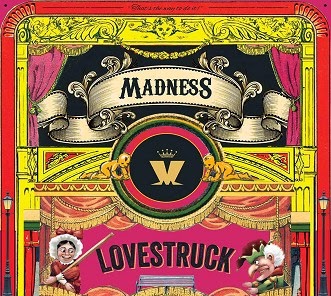 For this year's Record Store Day (Saturday, April 18, 2015), there will be another notable ska offering--coming on the heel's of last year's unexpected Specials RSD release and the inclusion of The Untouchables' "(I Spy for The) FBI" and Desmond Dekker "Israelites" vinyl singles in the Ten Big Stiffs box set issued on the 201 Black Friday Record Store Day.

Madness will be releasing two songs on vinyl: "Lovestruck" (from 1999's Wonderful) b/w "Le Grand Pantalon" (a fantastic, reflective version of "Baggy Trousers" that was used in a 2011 Kronenbourg 1664 beer ad and was included on the 2013 A Guided Tour of Madness box set). Neither track has been available on vinyl before.

This release also boasts a 3D Punch and Judy-type "Lovestruck" Toy Theatre that includes Madness-related items and characters, including pith-helmeted British soldiers from "Night Boat to Cairo," bottles of Madness Brewing Company beer (yes, there is Madness beer available in Europe; one of the varieties--in a nice bit of brand synergy--is an amber ale called "Lovestruck"), and a roller coaster (a reference to "House of Fun," of course).
Posted by Steve from Moon at 12:50 PM