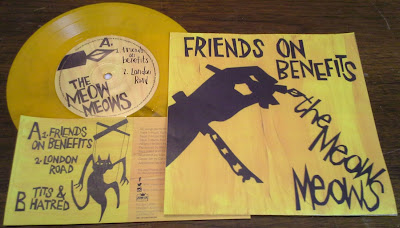 While this overtly political and progressive band with a Specials meets Deltones sound continues its terrifically barbed criticism of Prime Minister David Cameron's conservative policies and their deleterious effect on everyday Britons on the wonderfully catchy title track, astute Americans on this side of the Atlantic with an ounce of empathy in their hearts will recognize the cruelty and shame intentionally inflicted by Republican politicians on people down on their luck who have no other choice but to go through the purposefully humiliating experience of relying on the (meager) benefits of the welfare state.

That plan you had
Where has it gone?
Lie down, get up, jump down
Stick out your hand, you scrounging scum

Would you smile if I gave you a hand?
A little something that would make you a man
Friends on benefits, you're selling this
Hear my nemesis, reaping all the benefits

Run a mile, gotta make new plans
Force a smile, gotta shake some hands
Friends with benefits
I'm getting it, check my blemishes
Keeping all the benefits"

And in these days of extraordinary economic inequality, with everything rigged to benefit only those at the top and its dearth of decent non-fast food/Walmart type jobs, those fortunate to find employment oftentimes are stuck in drone-like, dead end positions that deny people their hopes for their lives...

"And here I am
Chained to a desk
Pushing my pen around
How did my life become grotesque?
Ignore the hurt, squash down my dreams
Drown out the stats and facts, and tear them down with angry screams

What about all my plans, where've they gone?
Wake up, shut up, don't moan
Be grateful you've a job at all"

I'd be remiss if I also didn't point out the cheeky double-entendre at play here--friends with/on benefits--and the implication that a little physical companionship might just help keep the unemployed friend feeling human enough and give them the psychological strength to face another day on the dole!

The menacingly dark and haunting "London Road" may refer to the 2006 Ipswich serial killings of five sex workers (who earned their money along London Road) committed by forklift operator Steve Wright (who also lived on London Road). It takes a very sympathetic view of the sex workers' plight (and the circumstances and addictions that led them down this path)--during the bridge of the song, one of the women laments, "Hello? I'm lost, can you help me? I'm lost on London Road..." The final lyrics of the song urge the women to get away from the very real perils of that red light district (as well as that "life") before it's too late.

On "Tits and Hatred," the conservative tabloids come under The Meow Meows' spot-on and withering fire for preying on the very worst instincts in humanity to turn a profit (and serving a hateful, bigoted agenda)--with no concern of how this affects the people or the policies of the nation. (Implicit in this criticism is how the tabloids have abandoned their basic mission of accurately informing the public of events in the world around them and, in a system of checks and balances, serving as a watchdog/source of reliable information on governmental activities, so that the citizens of a nation can be fully informed, in order to effectively participate in the political process.)

But behind the curtains
Different versions
Give you away

More salacious allegations
Fear and loathing, immigration
Can we get some degradation
Titillation, desperation
We don't need no education
Add a little provocation
Accusations, defamation
Tits and hatred
Sell the papers

Romanians are swarming
And there's nothing we can do
I read it in the paper
So, it's definitely true

They're coming over here
Taking all our jobs
For minimum wage

And what about Page Three?
Oh, they have dignity
You're kidding yourself

More salacious allegations
Fear and loathing, immigration
Can we get some degradation
Titillation, desperation
We don't need no education
Add a little provocation
Accusations, defamation
Tits and hatred
Sell the papers
Tits and hatred"

Brighton's calling--and though the news may be bleak, we all need to hear the message.

Email ThisBlogThis!Share to TwitterShare to FacebookShare to Pinterest
Labels: Duff Review, Jump Up Records, Prince Fatty, The Deltones, The Meow Meows, The Specials