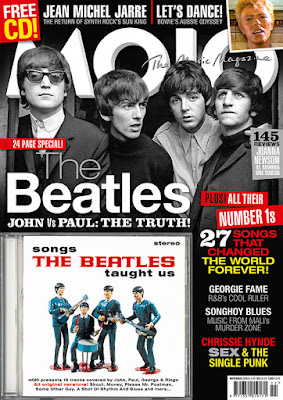 Given that a good deal of its music coverage is historic in nature and aimed at the middle-aged music fan (I'm guilty as charged--I'm smack-dab in their demographic!), MOJO is always pretty good about including news, features, and reviews relating to 2 Tone-era bands (and, to a lesser degree, the Jamaican originators). Their latest edition is a good case in point.

November's issue contains an excellent obituary for/tribute to Rico Rodriguez (who died on September 4, 2015) by reggae expert David Katz. Rico and Prince Buster also figure into a feature on 60s mod hero Georgie Fame, who performed a heady mix of rhythm and blues, soul, jazz, ska, and pop in London's  jazz clubs--and, of particular note to ska fans, in 1963, Fame played his Hammond organ on Prince Buster's I Feel the Spirit LP, the first ska album released outside of Jamaica. (I never knew much about Fame--inexplicably, he never broke big in the USA--but just ordered this incredible compilation of his 60s work and am looking forward to getting to know his recordings much better...)

The Bodysnatchers' Rhoda Dakar is spotlighted in MOJO's regular "Hello Goodbye" feature, in which musicians tell their story of how they came to join a band and then how they left it (willingly or not!). Ms. Dakar is promoting the Phoenix City/Cherry Red Records release of her stellar Rhoda Dakar Sings The Bodysnatchers album (The Duff Guide to Ska review of the Pledge Music version of this release can be read here; the only difference in these releases is that the Phoenix City/Cherry Red edition contains lots of archival photos and essential, new, lengthy liner notes by Rhoda herself). Ms. Dakar has also been performing live this fall--read a review of her excellent Halloween show at Camden's Jazz Cafe in Louder Than War (The Specials' Lynval Golding played on some songs!). All fans of 2 Tone should have her album. And if you're in the UK, make sure to get to one of her gigs!
Posted by Steve from Moon at 4:52 PM