I was away for much of this week, so am behind on reviews, news, etc. So, please forgive this late post on Lord Tanamo's passing.

On April 24, The Jamaican Observer announced that singer and songwriter Lord Tanamo (AKA Joseph Gordon)--a founding member of The Skatalites--passed away in Toronto at 82 on Tuesday, April 19, 2016. When I last wrote about Lord Tanamo in 2009, he had suffered a stroke, was in a nursing home, and had no contact with family or friends.

In tribute to Lord Tanamo, I'm re-posting my review of his excellent final album--Best Place in the World--recorded with Dr. Ring Ding and the Senior Allstars in 2000, which includes some background on Lord Tanamo's musical career. (One of the best collections of his original recordings is Trojan's I'm in The Mood for Ska: The Best of Lord Tanamo, released in 2007.)

We offer our deepest condolences to Lord Tanamo's family, friends, and colleagues.

It is fitting that Lord Tanamo, the first singer to front the brilliant Skatalites in the early 60s (he is said to have dubbed them the “Satellites”--this was the era of Sputnik and the space race, after all--and that quickly evolved into The Skatalites), should make an album with Dr. Ring Ding and The Senior Allstars, who are arguably one of the best ska/rocksteady/reggae acts currently on the planet. Lord Tanamo knows a top-notch band when he hears it, and he’s always backed by the best. 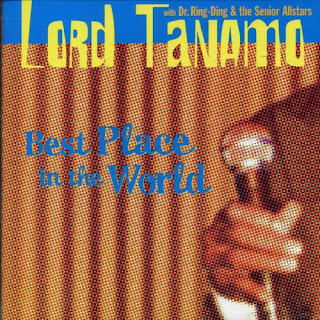 Lord Tanamo (AKA Joseph Gordon) launched his musical career in the early 1950s (when he was singing mento, R and B, jazz and calypso tunes, and by the middle of that decade was working with pre-Skatalite members Lloyd Brevette and Lester Sterling); half a century later, his gruff, yet wonderfully versatile voice is still in amazing shape. It almost goes without saying that Dr. Ring Ding and The Senior Allstars are in top form here (and yet their style of playing is so understated and confidently relaxed--the best always make it seem so easy!).

Best Place in the World kicks off with Tanamo’s signature tune with The Skatalites, his cover of Jimmy McHugh's and Dorothy Fields' 1935 song “In the Mood for Love” (AKA “In the Mood for Ska”), and several of his best-known songs recording with them are represented in fine form here, such as “Come Dung” and the Don Drummond tribute “Big Trombone.” Tanamo scored a big hit in the 70s with a reggae cover of “Rainy Night in Georgia” (which Prince Buster also transformed into the semi-naughty “Big 5”), and this version is truly sublime. The stripped-down cover of Prince Buster’s “Hard Man Fe Dead” is a revelation, with its acoustic guitar, congas, and spiritual-like backing vocals (and dare I say that it is almost better than the original?).

Yet the real gems of this album are Tanamo’s lesser-known songs, as well as several brand new tunes.  From Lord Tanamo’s back catalogue comes the surprisingly smooth ‘n’ sexy “Keep Moving”; the admonishing and upbeat treat-your-mother-right “Mother’s Love” (“A mother’s love is from creation/it is truly the greatest association”); and the sing-along rude boy tale of crime in “Iron Bar,” among others. Tanamo’s new tunes easily measure up to the caliber of his previous work: the unabashedly romantic “Best Place in the World” (“…is the place that you were born”), the wonderful old-school calypso “Musso,” and the rhythmic love song “Out of this Big World.”

After listening to Best Place in the World, it strikes me that Dr. Ring Ding and The Senior Allstars’ style of composing and arranging ska and rocksteady songs is very much in the same vein as Lord Tanamo’s (listen to their stunning debut album “Dandimite” after Best Place in the World and you’d never know that there had been almost 40 years between the time each set of songs was written). Dr. Ring Ding and The Senior Allstars don’t imitate the old time ska sound, they inhabit it--and that’s what makes this album (and the band in general) work so well. (Having said all that, it is eerie how much Dr. Ring Ding sounds like Lord Tanamo.) The Best Place in the World is wherever you are when you listen to this album, because the music that will be pumping out of your speakers is awesome. Get it!

(Originally reviewed in October 2000 and published in Read Magazine.)