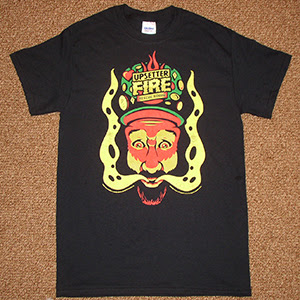 
As you may remember from this Duff Guide to Ska post, Perry’s home studio was completely destroyed in a blaze in December 2015, after which Perry’s wife said, “he didn’t even have a pair of shoes to wear.” 100% of the profits from the sale of the t-shirt and patch will go directly to Lee Perry. The shirts and patches are available now for only $15 and $5.00 respectively at www.stubbornrecords.com.

Stubborn founder King Django, a long-time Perry devotee, came up with the fundraising idea and worked with Steve Kitchen of Vancouver, Canada’s combination13.com to develop the brand-new four-color design. Kitchen was kind enough to donate his artwork to the cause, while Jeremy Myers of Jumpstart Screenprinting in Southampton, PA came on board offering a generous manufacturing subsidy.

According to Django, “I met Lee and his wife by chance in the Zurich airport just as I had wrapped up a European tour. They were both so kind and warm, I will never forget it. When I heard about the fire, I was heartbroken and speechless, and I had to think of some way to help.”