New UB40 Album "For the Many" To Be Released in Celebration of their 40th Anniversary (plus a Tour of the USA in 2019)! 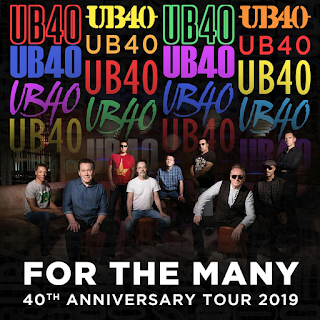 In celebration of UB40's 40th anniversary, the Robin/Duncan iteration of the band has recorded an album of all new material titled For the Many (a nod to Jeremy Corbyn’s Labour Party slogan), which will be accompanied by a dub version, and a third version featuring guest collaborators. The album proper and deluxe edition with the dub album can be pre-ordered via their Pledge campaign--with a release set for February 2019. (If you can believe it, the last time UB40 released a non-covers album was in 2008, with TwentyFourSeven, which included some truly great songs, including "Dance Until the Morning Light," "Middle of the Night," and "Oh America"). They also will be touring the UK and USA in 2019.

UB40 featuring Ali, Mickey, and Astro have recently released another album of covers, A Real Labour of Love.

For more on UB40, check out The Duff Guide to Ska appreciation of Present Arms that we posted a few years ago.

If you are a big fan of 80’s rock music, including UB40’s saxophonist Brian Tavers and Dire Straits bassist, John Illsley, then you definitely wouldn’t want to miss this exhibition. On November 22nd the world of art and rock music comes together at the Kempinski Hotel Bahía in Estepona, Spain. In this exhibition, you will find the rare artwork of these talented musicians such as Brian's artwork on UB40’s album cover for their latest record to celebrates the band's 40th anniversary. John Illsley will unveil the cover of his soulful new album Beautiful You.

For this exclusive exhibition, both artists have partnered with Dragon Art. Consistent with his belief in win-win business relationships, Paul Moynan, the co-founder of Dragon stated that Dragon is set to enter into the 63 Billion dollar a year of art industry by offering a modern legacy platform for artists and art lovers. With a wide range of new ways for creative people to reach new audiences, the opportunities for today’s artists have multiplied by embracing Dragon Art innovation. Through sole use of Dragon Coin, the world’s number one entertainment coin, attendees will become eligible for special offers, including (but certainly not limited to) VIP concert tickets and a chance to meet the artists. Check out Dragon Art website at https://dragonart.drgx.io to see the art works from these brilliant musicians and find out more about Dragon Art.