Boy George: "People Who Don't Like Reggae Music Are Quite Disturbing" 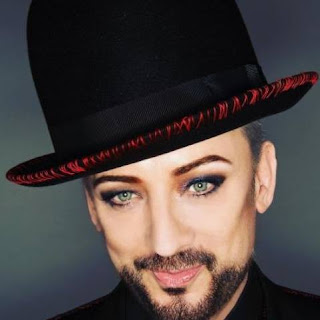 Culture Club have a new album coming out soon (called Life), so Boy George has been making the rounds with the music press to promote it. And that's how I came across this incredible exchange from the October 19/26, 2018 issue of Entertainment Weekly:

EW: "A few of the tracks, including the single "Let Somebody Love You," have a strong reggae vibe. Did you listen to a lot of that while making Life?"

Boy George: "I've always liked reggae music. I'm always surprised when people don't love it, but there are people out there who don't. Look, there are people out there who don't like Bowie! I've met them! I've met people that have said to me, 'Yeah, I didn't ever really get into Bowie.' I'm like, 'Well, which period did you not get into?' Because there's so many different parts of Bowie. And I think the same thing with reggae music. People who don't like reggae music, I think, are quite disturbing."

Boy George released a fantastic album called This Is What I Do back in 2014 (which we reviewed) that contains a good number of reggae tunes (roots and dancehall)--and is absolutely worth picking up, if you haven't already.