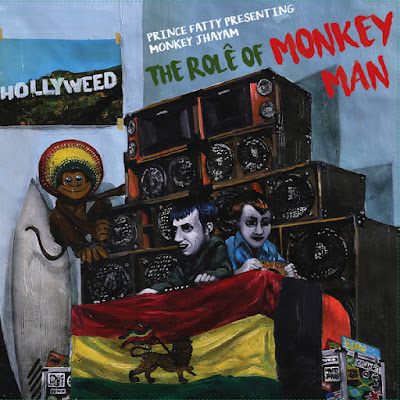 Prince Fatty Presenting Monkey Jhayam The Rolê of Monkey Man (digital/LP, Delicious Vinyl Island, 2018): I knew next to nothing about this LP when I mail ordered it after finding out that limited copies were available through Prince Fatty's Bandcamp page. But it didn't matter--his recent, left field collaborations with Nostalgia 77 and Dele Sosimi and The Last Poets, in addition to just about every other release in his catalogue, have been consistently excellent, so why would this collaboration with Monkey Jhayam--one of Brazil's top reggae artists, who sings/toasts in Portuguese and has a terrific, laid-back delivery--be any different? As The Rolê of Monkey Man is slated to be the first of several Fatty/Jhayam albums for Delicious Vinyl, this record is consciously pitched to introduce him to an audience beyond Brazil's borders (and succeeds). So, it follows that Fatty employs almost a dozen classic/evergreen riddims and choice covers for Jhayam to toast over/augment, and utilizes a host of ace guest artists (Horseman, Earl 16, and Tippa Irie), many of whom are well known to the PF crowd/have appeared on his productions (and are a good contrast to Monkey Jhayam's chill style). The album kicks off with "Rolê" ("Scroll"), which versions Jackie Mittoo and the Soul Vendors' "Hot Milk" riddim (also used decades ago for two of my all-time favorite tracks: Yellowman and Fathead's "I Can't Stand It" and Carlton Livingston's "100 Weight of Collie Weed"). Other riddims/covers heard here include "Mãe da Lua" ("Mother of the Moon")/"Everybody Love the Sunshine" (with Omar Lye-Fook and Fatlip--of The Pharcyde), which is another great take on this 1976 Roy Ayers jazz-funk-soul gem that Fatty, Omar, and Fatlip released as a single for last year's Record Store Day; John Holt's "Police in Helicopter"; Dub Specialist's "Dub Creation"/Dennis Brown's "Created by the Father" on "Eles Não Sabem" ("They Don't Know"); Smoke City's 1997 trip-hop hit  "Underwater Love" (featuring a fantastic Nina Miranda--she co-wrote and sang on the original track--who reminds one very much of Hollie Cook); Gwen McCrae's 1974 funk-soul b-side "90% of Me is You" (with a completely phenomenal Shniece McMenamin); an incredible funky reggae take on James Brown's "Soul Power" for "Soul Powah" (also with McMenamin); as well as a few other riddims I know are in there, but can't quite identify without investing major time figuring them out. In sum, another winning Prince Fatty production!