Duff Review: The Last Poets (w/Prince Fatty and Nostalgia 77) "Understand What Black Is" 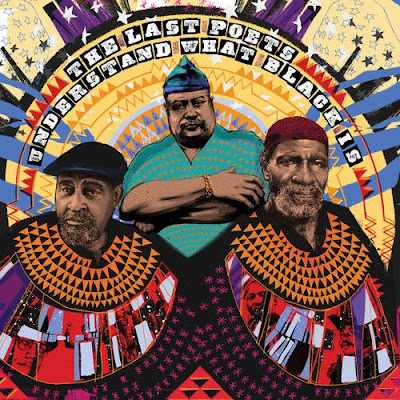 Anyone who's read Jeff Chang's pretty phenomenal history of the origins of hip-hop "Can't Stop Won't Stop" (particularly chapter 2, "Sipple Out Deh"--here's the money quote: "Dub's birth was accidental, its spread was fueled by economics, and it would become a diagram for hip-hop music. A space had been pried open for the break, for possibility. And, quickly, noise came up from the streets to fill the space--yard-centric toasts, sufferer moans, analog echoes--the sounds of people histories, dub histories, versions not represented in the official version.") knows how reggae helped birth hip-hop via DJ Kool Herc (Jamaican-born Clive Campbell, whose family emigrated to The Bronx when he was 12 and who brought his experience/knowledge of sound systems and Jamaican dancehall deejays/toasters with him as he started to DJ his own parties and used the percussive "breaks" from funk LPs--which he lengthened by repeatedly fading back and forth between the start and finish of the same break on two records--to lyrically rhyme over). Equally as influential on the creation of hip-hop were the sharply political and radical spoken word artists like The Last Poets (founded in 1968 on Malcolm X's birthday) and Gil-Scott-Heron, who were heavily influenced by the Black Power and Black Arts Movements of the 1960s and 1970s (which promoted "African-American intellectual achievement, political power, and cultural pride" and challenged America's institutional racism and culture of white supremacy) and typically delivered their poetry of "versions not represented in the official version" over backing jazz, blues, or soul instrumentals.

So, it's fitting that The Last Poets have engaged both Prince Fatty (Mike Pelanconi) and Nostalgia 77 (Ben Lamdin) to produce and write the driving and insistent roots reggae and Jamaican jazz musical accompaniment for Understand What Black Is (recorded for their 50th anniversary and also the first time their poetry has been paired with reggae which--as Linton Kwesi Johnson and Dennis Bovell have so aptly demonstrated--works quite well together). Stirred to action by the current (though not the first) white supremacist in the White House, The Last Poets continue to have much to say about the dismal racial state of our Union as far as Black people are concerned and the extraordinary impact that Black culture and creativity continues to have on America. Each of these songs is densely packed with compelling imagery and commentary (thankfully, there is a lyric insert). There is much to unpack, so much so that this album might be best digested in short sessions for maximum impact/reflection.

The title track "Understand What Black Is" illustrates the absurdity of racism as well re-orients our perspective from the dominant white, Western European lens, since "Black is humanity" (our collective origins trace back to decidedly non-white people in Africa--and everything about our species and its resilience and accomplishments has flowed from them): "Understand what Black is/The source from which all things come/The security blanket for the stars/Understand was Black is/It is not a color/It is the bases of all colors/It is not a complexion/It is a reflection/Of all complexions called human."

The righteously defiant "How Many Bullets" points out that despite centuries of enslavement, oppression, and murder, American racists have not--and can never--destroy the spirit, culture, and pride of Black people ("You can't kill what you can't see"). In a similar vein, the phenomenally epic "Rain of Terror" is a comprehensive history of white supremacy and racial violence in in the United States ("America's a terrorist!"), from the first white European settlers in the 1600s to the present--referencing mostly (and conveniently) forgotten horrific events like the destruction of Rosewood, the Tulsa race massacre, and the Philly police dropping a bomb on MOVE (seriously, this should be used in history classes across America as means to help kids to learn about our nation's outrageous and disgraceful treatment of non-white people throughout its existence).

Of course, not everything on Understand What Black Is is a bleak reminder of America's Original Sin. There's the lovely tribute to Prince in "North East West South" ("I will try to make sure that no Purple Rain gets stuck in the clouds again") and Biggie Smalls is remembered in "She Is." "What I Want To See" is about envisioning the best for everyone after witnessing the worst ("No prisons no locks no keys no killings no laws/To control the free of us/But a paradise a heaven on Earth/Where everyone can sing and dance/To their own music/And we live only to bless each other"). And "The Music" reminds the listener of an obvious but often not really recognized truth that pretty much all contemporary music that developed in the Americas (gospel, blues, jazz, rock, reggae, rap, salsa, etc.) is Black music with common roots in Africa spread throughout the "New World" via the slave trade.

To quote Max Romeo and Lee Perry, in these "sipple out deh" ("slippery out there") days, as America's Civil War continues to play out in the most grotesque ways, The Last Poets' Understand What Black Is provides a host of reasons to be angry, inspired, hopeful, and aware. It's the protest music that these times demand and good people need if a lasting change is ever going to come.