The Duff Guide to Punk: The Blankz "(I Just Want To) Slam" b/w "Baby's Turning Blue" 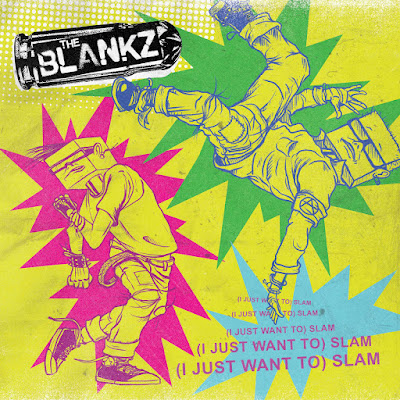 There's a brilliant purity to The Blankz's sweetly dopey and immensely fun late '70s/early '80s New Wave-ish American punk (think a combo of early Devo, first-three-albums Ramones--each member's last name is Blank, too!--and bands from the LA/San Francisco punk scenes, like The Zeros, The Normals, The Bags, The Units, The Offs, your fave band here, etc.). This ain't no arch parody act (thank god), but a band of talented believers in the music and attitude of that unparalleled era. Like many of those groups, there's no hidden agenda, it's WYSIWYG. The Blankz sing about wanting to slam dance in "(I Just Want To) Slam": "Now I'm full of rage/Flying off the stage/Landing on the floor/Ready for some more/Pogo in the pit/Shoot a gob of spit/Full of energy/Ready mentally!" While "Baby's Turning Blue" is what they consider their "anthem of the opioid epidemic"--about someone who hasn't been seen at the methadone clinic for a bit because they've OD'd (sung by a 13+ years sober Tommy Blank). Of note, Cris Kirkwood of the Meat Puppets (Up On the Sun was a fave of mine in the late '80s) and fellow Phoenix resident did a bang-up job of producing these terrific wham-bam songs--and this is the second single in a planned series of nine (!) that The Blankz are releasing (the debut issued last month was "White Baby," about Tommy Blank's real-life experience growing up after being adopted as an infant by a Mexican family: "White baby/Brown mommy/White baby/Brown daddy/Why am I so confused/Around all these brown dudes?").

Email ThisBlogThis!Share to TwitterShare to FacebookShare to Pinterest
Labels: Cris Kirkwood, Devo, Duff Review, Meat Puppets, New Wave, Punk, The Bags, The Blankz, The Normals, The Offs, The Ramones, The Units, The Zeros