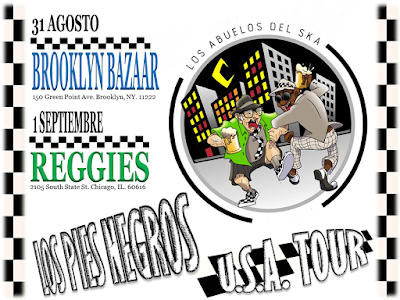 Editor's note: Later this month, Los Pies Negros--founded in the early 1990s in Puerto Rico--will be making a rare appearance on the mainland US, with shows in Brooklyn, NY (on 8/31/18 at Brooklyn Bazaar with Mephiskapheles, The Pandemics, Ensamble Calavera, and DJ Ryan Midnight) and Chicago, IL (on 9/1/18 at Reggies with Malafacha, Nahuales Underground, and DJ Chuck Wren). So, we though this was a great opportunity to catch up with Los Pies Negros' bassist and founding member, Werner Rodríguez Del Toro. (Thanks to Chris "Kid Coconuts" Acosta of The New York Citizens and producer of Moon's Latin Ska comps for helping to make this happen!)

Duff Guide to Ska: How did this mini-tour of the US (New York/Chicago) come about? When was the last time Los Pies Negros played in the US mainland?

Werner Rodríguez Del Toro: "The Chicago show came about when we were contacted by someone at a club called Reggies who wanted Los Pies Negros to play a ska festival there. After approximately a year of conversations, it became real.

The last time that Los Pies Negros played in the US was in 1994, when we performed at the Skavoovie festival at NYC’s S.O.B.'s and one event with Spring Heeled Jack in New Haven Connecticut the following day."

DGTS: The band has been in existence for about 27 years now. When you started it back in the early 1990’s, did you think you’d still be playing all of these years later (long enough that your most recent release was called The Grandfathers of Ska)? What has kept you going?

WRDT: "[At that time,] I did not think that in the future I'd be playing in Los Pies Negros. I ignored my thoughts and lived in the moment. I live every moment like it's a song and feel every note from the start to the finish--enjoying every detail, every second of the song. The same goes for my life and my band. And I feel that you can never get enough out of enjoying and playing the music you love, the music you feel. Without music, life has no meaning for me.

I think that what kept me in the music is the love I feel for it. And the reason that Los Pies Negros is alive is because every member is passionate about the band's music--and each of us is not just a member of the band, we are a family.

Regarding our last recording Los Abuelos del Ska (The Grandfathers of Ska), I want to mention that we wrote this single because two of our members became grandfathers and none of us expected ever to be a grandfather and still in a band playing ska music. And the song speaks to that feeling."

DGTS: Many ska fans from the '90s became aware of the band through Moon’s Latin Ska compilations and the Bang movie soundtrack. What have been some of Los Pies Negro’s highlights in the years since then (releases, festivals, etc.)?

WRDT: "After that era, we recorded one of the most recognized albums named Siempre Igual (1996).

We started to play some big events in Puerto Rico, and later with the help of underground distribution, our music was being recognized in Latin countries like Mexico, Colombia, Costa Rica, etc. In 1999, we played our first big show in Mexico with bands like Desorden Publico and la Vela Puerca. Some years ago, we played one of our best concerts ever in Mexico, the "Non Stop Ska Festival." Later we played another big event named "Skatex," in Mexico. We did some recordings like Un Alien me Rapto, Detras de ese Disfraz, etc."

DGTS: What is the Puerto Rico ska scene like? (And how have things been there for you, your family, and friends in the year since Hurricane Maria devastated the island?)

WRDT: "In Puerto Rico, the ska scene is very small. Only a few people follow ska as a lifestyle. But we have a lot of fans that are not necessary only into ska. We have fans from different genres like punk, reggae, rock, Latin rhythms, etc.--because I think our music is different. We have followers of all ages. We've played everywhere and have met people at our shows who had never heard of us and after seeing our show started to follow us. The events in Puerto Rico are for a few people, but are very interesting because the people here feel the music when we play.

The first months after Hurricane Maria were very difficult, but now we are good. As a country, Puerto Rico is a fighter and we are rebuilding it again with or without the 'mainland' help."

DGTS: What is the significance of the band’s name?

Thanks to Werner Rodríguez Del Toro for taking the time to do this interview!