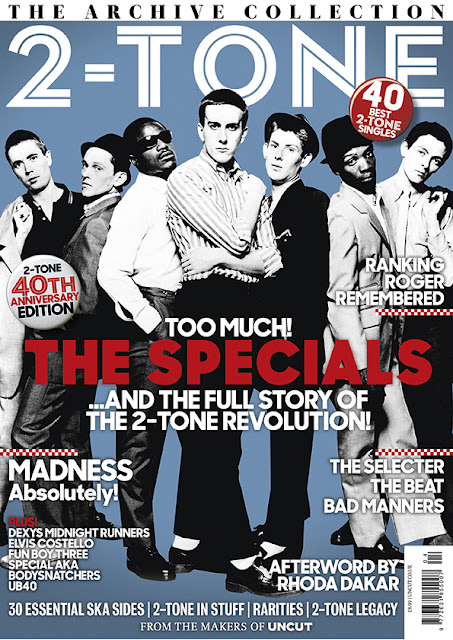 Apart from the absolutely fantastic Selecter/Rhoda Dakar show that I caught recently here in NYC (read my review), I've been pretty disappointed at the general lack of 2 Tone 40th anniversary events, releases, etc.--and I'm sure I'm not alone in feeling this way (the half-speed remastered, billionth re-issue of The Specials' debut LP, along with the box set of re-issued 2 Tone 45s that most die-hard fans already have collected over the years are okay for newbies, but pretty thin gruel for anyone else). And, yes, we get it--a whole lot of people in these bands are still mad at each other for transgressions of varying degrees committed over the years and more than happy to continue to take public swipes at each other in the press. Perhaps it is too much to expect our musical heroes--who promoted things like tolerance, love, and unity back in the day--not to have clay feet like the rest of humanity. But in many ways, this anniversary isn't really about the 2 Tone bands and label, but the multitude of fans worldwide for whom this music is still incredibly relevant and treasured. The 2 Tone faithful would have been so happy and grateful if everyone still standing (RIP Rico, Brad, and Roger) could have temporarily put aside their differences, issued some previously unreleased music from the vaults, and played some reunion concerts in key cities around the world. You know, put some effort into it. They owe this to the fans.

One 2 Tone 40th anniversary-related release that is definitely deserving of fans' attention is Uncut's "The Ultimate Genre Guide: 2 Tone," which contains newly written/considered overviews of each band's career (though I take enormous issue with John Lewis' trashing of The Beat's Wha'ppen?, which is one of my favorite albums of all time), as well as reprints of late '70s/early '80s pieces and interviews with all the bands from Melody Maker and NME (which are worth the price of admission in themselves!), and new articles like "The Ska Roots of 2 Tone" and "The Best 40 Ska Singles." In short, this magazine is a 2 Tone 40th anniversary souvenir book of sorts--and something that I'll be keeping on the bookshelf to refer to over time, along with all of my other ska and reggae books.