Duff Review: "Memoirs of a Ska Librarian: The History of Rude Skazine" 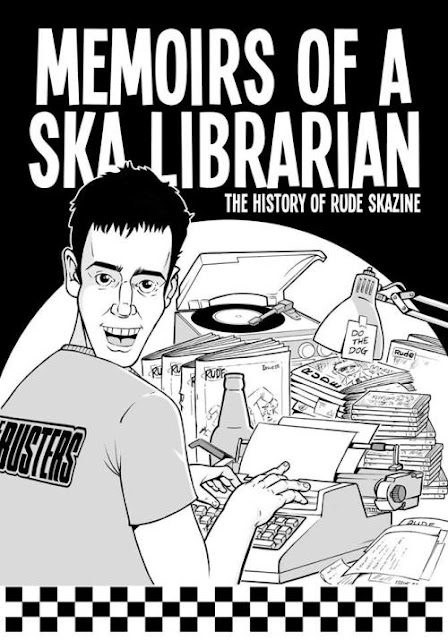 From our vantage point in time, it's kind of quaint to imagine/remember a time before the internet and social media, when information about non-mainstream bands was sometimes nearly impossible to come by. But, thanks to the late '70s punk DIY ethos that helped spawn zine culture (see Punk, Sniffin' Glue, Jamming, etc.), fans of underground sounds and scenes from the mid-'70s on strived to remedy that dilemma by creating their own means of disseminating band news, interviews, and reviews, filling a void that the establishment music press likely didn't know existed (or didn't deem profitable enough to cover or care about).

For the late '80s/early '90s ska scene, skazines were crucial lifelines to what was going on outside one's own limited sphere of experience and knowledge. Apart from a printed catalogue from an indie label, a flyer for a show on a telephone pole or in a record store window, or second-hand info via a ska-obsessed friend, there was virtually no other source of ska info than a zine (I first became involved in the ska scene by writing reviews for the Bakersfield, CA-based skazine Roughneck Business back in 1990). Since the mid-to-late '80s British ska scene (The Loafers, Potato 5, Laurel Aitken, Deltones, Trojans, Maroon Town, Hotknives, Riffs, Capone and the Bullets, King Hammond, Bad Manners, etc.) had a big jump on its American counterpart (which didn't really get its act together nationally until 1993-1994; earlier in the 1980s, ska flourished in a few US cities, but these scenes were largely parochial and isolated), the UK skazines cropped up a bit earlier. In addition to George Marshall's fantastic, but much shorter-lived, Zoot!, the other absolutely essential UK skazine of this period was Kevin Flowerdew's Rude. While most skazines reported on a local or regional scene, Rude endeavored to cover it all--and was by far the greatest source of international ska news, bar none.

Originally written on a typewriter, then cut and pasted, and xeroxed, each issue of Rude offered dozens upon dozens of short paragraphs conveying the latest news relating to ska bands' tours and goings on, and/or brief reviews of new releases. It was a wealth of precious ska info contained on two (or more) folded and stapled A4 sheets of paper that tipped you off to your next favorite band or album (from the next town over or the other side of the world) that you never knew existed.

Kevin Flowerdew's Memoirs of a Ska Librarian: The History of Rude Skazine (5 zines printed on glossy paper, Do The Dog Music, 2019) celebrates the best of Rude, which was published between 1989 and 1996 (when Flowerdew changed the name of the zine to Do The Dog, to match the ska label that he had launched). Memoirs focuses on Flowerdew's intro to ska (via 2 Tone, of course), the origins and history of Rude, as well as his front row experience witnessing the rise of The Loafers (his brother Sean's first band--he'd later be in Special Beat and Pama International, and created the London International Ska Festival in 1988, which continues to this day). Flowerdew wasn't just documenting and promoting the scene, he was urged to form his own group by the "Godfather of Ska" himself, Laurel Aitken (his sage advice: "If you love ska, you should start your own band")--and quickly followed Aitken's directive by founding Bakesys Midday Joggers (later shortened to The Bakesys), whose history and exploits are also recounted here. Memoirs of a Ska Librarian is accompanied by four special issues of Rude--each covering two-year periods from 1989-1990, 1991-1992, 1993-1994, and 1995-1996--and reprinting the best bits from those respective years. In particular, it's fascinating to watch the American ska scene explode as you turn these pages.

Rude had an astonishingly broad reach and was incredibly influential--so much so, that back when I was doing promotions for Moon Ska Records, Rude was always amongst the first batch of promo copies of a new release that I'd mail out (in the early years, these were cassettes!). At a time when people either had to (proactively) mail-order an album or head out to their local record shop to buy it, Rude's review was vital to getting the word out to ska fans (who would hopefully support our bands with their hard-earned cash!). What was particularly impressive was how Flowerdew gave everyone a fair shake--if a band took the time to send him a letter or package, he'd write about them in the next issue. It was a very democratic approach; new bands on the block received the same coverage as established ones and made Rude's scope all the more comprehensive. And that's what makes the librarian comparison in the title so apt--with Rude, Flowerdew was cataloging that era of ska like no one else on the planet.

Whether you lived through this time as a ska fan or missed out on it due to the timing of your birth or other circumstances, you'll find Memoirs of a Ska Librarian and the special editions of Rude a truly great read that will likely spur you to dig out albums from this period to play or track down copies of records you definitely now need on Discogs. But they also help document this pre-digital era in ska, so much of which only remains in fans' memories, record collections, and in shoeboxes in closets--and remind one of how the 1990s ska scene would have been significantly diminished/hampered had this amazing skazine not existed.