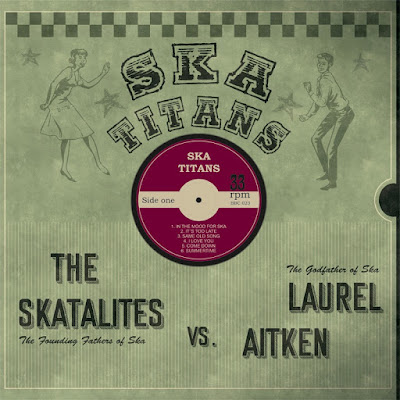 Even though it had been recorded in 1996, by the time the master tapes for Ska Titans had been licensed to Moon Ska Records and slated for release in 1999, the writing was on the wall for the label. (Full disclosure: I was the director of promotions, marketing, and production for Moon from 1991-1999.) Troubling warning signs portending a significant downturn for Moon's future prospects were evident by the summer of '98 and cost-cutting measures were soon implemented across-the-board. Much to the label's detriment, one of these restrictions was not hiring freelance graphic designers to create CD artwork for new releases. By this point in Moon's history, we had built up a roster of pretty amazing designers to use whenever one of our bands didn't provide us with artwork for their release, including Gile Ribiero (see The Bluebeat's Dance with Me, Laurel Aitken's The Bluebeat Years, Skarmageddon 3, and more), Mike Reddy (The Skalars' Skoolin' with The Skalars, Bad Manners' Heavy Petting, Tricia and The Supersonics' King Bravo Selects Ska Authentic, Volume 2, Nihon Ska Dansu, and more), Jeremy Donelson (Love and Affection: Ska in the Key of Love, Ska United), Jordan "Jafo" Worley (Skankaholics Unanimous, The Toasters' Don't Let the Bastards Grind You Down, Christma-Ska), and the late Andrew Blanco AKA King Chango (The Toasters' Dub 56 and Hard Band for Dead, Skarmageddon, and more). So, it was painful to see what was created in-house for the cover of Ska Titans (by someone who it was later discovered stole a fair amount of money from the label over the years)--a pixelated close-up of tree bark with text over it. Not one of our finer moments by far.

This shabby cover artwork--for an album released at a point after Billboard, Alternative Press, and others had declared ska "dead" (which had triggered a tsunami of returns from record chains and mom and pops; whenever the UPS truck showed up, it was to bring box after box in, instead of out)--worked overtime against the amazing music by ska's founders contained inside, which was such a shame, particularly considering Moon's championing of Laurel Aitken and various Skatalites (Tommy McCook, Lloyd Brevett, Lester Sterling, Tricia and The Supersonics) through its series of "Ska Authentic" releases (and heavy tour support for Laurel Aitken) in the US. Needless to say, at the time, this album sold poorly. Fortunately, Black Butcher Classic's vinyl-only issue (the first time this has been released on LP) available in the USA through Jump Up, provides this album with excellent retro packaging (though oddly devoid of any credits or liner notes), which helps rectify the sins of the original and should help entice the ska faithful to explore the wonderful ska music within.

Ska Titans was recorded during the 1996 European Ska Splash Skatalites/Laurel Aitken tour (both acts were represented by the same manager) and marked the first time they had recorded together since 1963. During Aitken's '63 visit to JA from the UK, he and The Skatalites recorded twelve of his songs at Ken Khouri's Federal Studio at Laurel's expense--and he made sure never to let the masters that he owned out of sight, for fear of being bootlegged; all tracks were released in '63 and '64 on a series of Rio and Black Swan singles that were later collected and issued in 1990 by Unicorn Records as Laurel Aitken with The Skatalites, The Legendary Godfather of Ska, Volume 3. For the Ska Splash tour and Ska Titans recording, a good number of the original Skatalites were still around and active, including Roland Alphonso, Lester Sterling, Lloyd Brevett, and Lloyd Knibb (all accompanied by newer members Devon James, Will Clark, and Nathan Breedlove).

Ska Titans features re-recordings of six Aitken originals (including his classics "It's Too Late," "Rude Boy Dream," "Bad Minded Woman"--which he first taped with The Skatalites during that '63 session--and the epic, dubby, and moody "Summertime" ("...in the ghetto"), which is a version of his "Who Sey," from his awesome Superstar album), the perennial "In the Mood for Ska," a cover of The Four Tops'/Holland-Dozier-Holland's "Same Old Song," and a few live recordings taped in Amsterdam, including a Don Drummond composition ("Confucius") and Doreen Schaffer doing vocals on Aitken's "Sugar Sugar." Everyone's performances, both in studio and live, are top-notch and the studio recordings are brilliantly warm and vibrant (thanks to Victor Rice, who mixed this album), while the live tracks have a wonderful clarity and immediacy to them, as if you were in the venue as this happened.

Ska Titans would have fared better had it released earlier in that decade (and, of course, with better packaging), but it remains a triumph--a testament to the incredible talents of Laurel Aitken and The Skatalites, the originators and elder statesmen of ska, who continued to burn brightly throughout the 1990s. If you're a fan, you need this album in your collection.