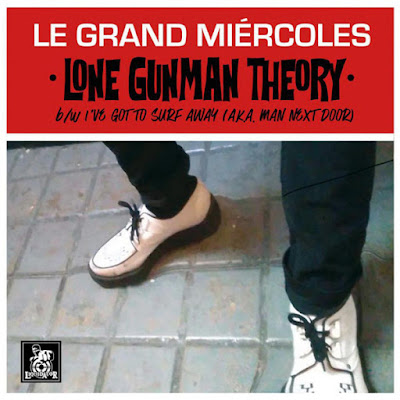 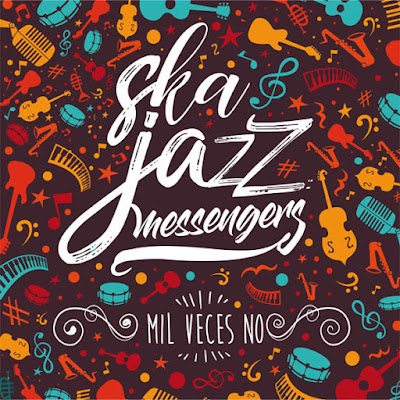 Le Grand Miércoles "Lone Gunman Theory" b/w "I've Got to Surf Away" (7" vinyl picture sleeve single, Liquidator Music, 2019): The latest single from Le Grand Miércoles serves up yet more amazing surf-ska-rocksteady (they've labeled it "surf steady") from this Spanish ska supergroup (with members of The Malarians, Dr. Jau, Pataconas, The Offbeaters, and the Golden Singles band). "Lone Gunman Theory" (which, of course, refers to the Warren Commission's official determination that Lee Harvey Oswald was the sole assassin involved in JFK's killing and that there wasn't a conspiracy to assassinate the president) is a sprightly, if moody (and kind of laid back for the band), organ-centric instrumental. The flip side revisits their incredible, supercharged cover of John Holt's "Man Next Door" from their fantastic 2014 Ghost Cowboys album (read The Duff Guide to Ska review of it here), this time adding--intentionally or not--slightly Elvis-sounding vocals to great effect. Oddly, they don't go the nine yards and revise the lyrics from "I've got to get away from here" to "I've got to surf away from here..." Marvelous stuff, nonetheless!

Ska Jazz Messengers "Mil Veces No" b/w "Mil Veces Dub" (7" vinyl picture sleeve single, Liquidator Music, 2019): This is the excellent debut single from this Venezuelan band, in advance of their first album, which is slated to be released later in 2019. "Mil Veces No" ("A Thousand Times No") is a 1969 pop-soul b-side by Venezuelan pop group Las Cuatro Monedas (The Four Coins) about being once bitten, twice shy ("I was in love with you/and suffered loving you like that/I don't want to repeat it") and is transformed into a wonderful Skatalites-like track by the Ska Jazz Messengers. The dub on side b is more of a straight-up instrumental version with some echo effects mixed in, which is fine, but including another new or previously unavailable track might have been a better move (like their awesome cover of Pharell William's "Happy" from a few years ago). Having said that, this single is a compelling teaser for their new album!