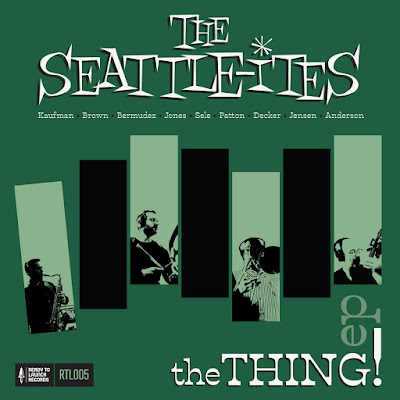 The Seattle-ites' six-track debut EP, The Thing (10" vinyl/digital, Ready to Launch Records, 2019), showcases the band's superb songwriting and musicianship, as well as their mastery of the jazz-big band-ska hybrid pioneered by the magnificent Skatalites (they cover Tommy McCook's end of the party, slow-dancer "Starry Night," which is a version of Glenn Miller's arrangement of one of the movements in Tchaikovsky's "Symphony No. 6 in B minor") and all of the associated musicians in their orbit (like Lynn Taitt and Ernest Ranglin). So, it comes as no surprise that members of The Seattle-ites come from Seattle area trad ska acts (like The Georgetown Orbits) and classical groups (such as The Seattle Symphony!)--and each track provides ample solo opportunities for these musicians to show off their considerable chops.

The mysterious title track--named for the 1951 sci-fi monster movie or the VW jeep-like car?--immediately builds tension with a series of percussive minor chords (that are somehow reminiscent of the opening brass riffs in the 1960s British TV show "The Avengers") before releasing some it with the introduction of the song's melody that's improvised upon and returned to for the rest of the track. Both the jaunty "Sidewinder" and brisk-paced "Freedom Ska Dance" (with its fantastically crazy, almost dissonant jazz horn sequences) are dead-ringers for Skatalites originals and sure to pack the dance floor when performed live or heard via sound system. The wonderful and wittily titled "Prado for P'rez" is heavy on the mambo, while "Ska-la-Mode" is a sublime slice of vintage ska that could have been off The Scofflaws' brilliant debut. The Seattle-ites clearly invested a lot of time, creativity, care, and love in The Thing and you, the listener, receive so much in return. This EP is a true thing of beauty.