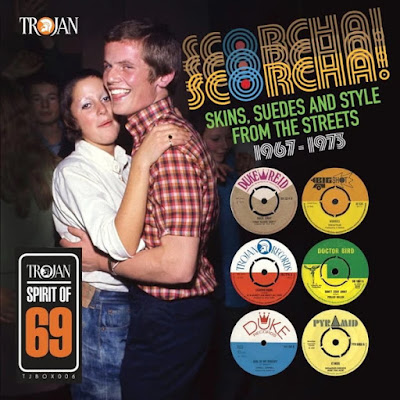 All of the tracks on this phenomenally good box set of 7" singles from the late '60s/early '70s skinhead reggae era were selected by Paul 'Smiler' Anderson and Mark Baxter to accompany their forthcoming book "Scorcha! Skins, Suedes and Styles from the Street, 1967-1973" (Omnibus Press), to be released on July 23, 2020. As the title suggests, their book focuses on the rise of the original UK mod, skinhead, and suedehead youth subcultures--and this brilliant collection of both well-known and you-had-to-be-there obscure tracks documents and highlights some of the truly incredible music that was fueling these scenes.

The more popular songs here, all impeccable choices, are Symarip's "Skinhead Girl," Desmond Dekker and the Aces' "It Miek," The Melodians' "Sweet Sensation," Phyllis Dillon's "Don't Stay Away," and Ken Boothe's "Freedom Street." But it's the lesser-known gems (the originals of which are mostly mega pricey or near impossible to find) that make Scorcha! Skins, Suedes and Styles from the Street, 1967-1973 invaluable to any fan of rocksteady and skinhead reggae (I, for one, am so happy to have these tracks on 45s!). These include Freddie Notes and The Rudies' version of "Guns of Navarone" (think of The Upsetters with Dave Barker 's exhortations); Keith Hudson's "Shades of Hudson" with deejay Dennis Alcapone; The Jay Boys' "Can't Get Next to You" (a mind-meltingly good funky reggae cover of this Temptations track, produced by Lloyd Charmers); Errol Dunkley's "The Scorcher" (which is a cooly understated, but deadly menacing rocksteady classic produced by Joe Gibbs that he recorded when he was just 16: "I am The Scorcher and I'll put the pressure on you!"); The Versatiles' "Worries" (featuring a certain Junior Byles); Clancy's All Stars "C. N. Express (Part 1)" with Clancy Eccles, Lee "Scratch" Perry, and Count Sticky on vocals; Cool Sticky's "Train to Soulsville," (which is a version of The Ethiopians' "Train to Skaville"); Lloyd Terrel's hilariously suggestive "Bang Bang Lulu" (which is actually based on a much versioned traditional American folk song that during both World Wars had military cadences that implied explicitly lewd rhymes, but never actually deliver them: "...Lulu has a bicycle/The seat's on back to front/Every time she sits on it/It goes right up her.../Bang bang Lulu/Lulu's gone away/Who's gonna bang bang Lulu while Lulu's gone away?"); Lyn Taitt and The Jet's "Soul Food" (penned by Perry; Sir Lord Comic might be the vocalist); and Cornel Campbell's fantastically sultry and soulful "Girl of My Dreams."

Trojan did a bang-up job producing this box set. Each side's label is a reproduction of whichever Trojan imprint originally released it (Big Shot, Amalgamated, Dr. Bird, Duke Reid, Blue Cat, GG Records, Grape, Harry J, etc.) and the insert includes a lengthy excerpt from the book with first-person recollections of what it was like to be a part of that era--and sure to make one want to pick up a copy of it. Scorcha! Skins, Suedes and Styles from the Street, 1967-1973 is one of the finest releases from Trojan in recent memory. Don't miss it!

Was playing this on Spotify recently, good mixture of well known and obscure tunes. Didn't know about the book you mentioned, will look out for that, cheers!

Thanks for your comments!