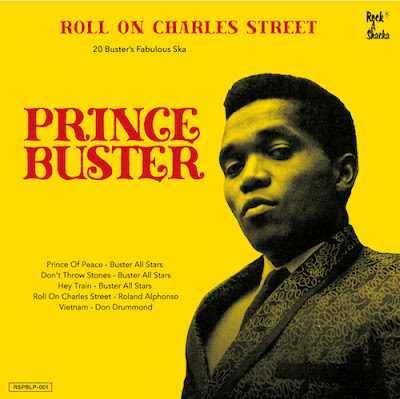 Just the other day, I pulled out all of the Prince Buster albums and comps that I have on vinyl and found that it's a decent and sizable collection (fifteen LPs in total, most of them represses)--yet it's merely a fraction of his output from over the years, much of which has never been reissued (Blue Beat Records released over 600 Buster productions in the UK during the 1960s!). While I jump at the opportunity to obtain any new collection of his work--like Rock A Shacka's fantastic new Roll on Charles Street compilation or the recent and extraordinary Africa - Islam - Revolution compendium--Prince Buster is more than deserving of a comprehensive box set (or series of box sets!) documenting his extensive and often groundbreaking work as performer and producer. One hopes that whatever legal and/or financial barriers that are preventing this from happening are overcome someday, so the world will have a much fuller understanding of his career and vital contributions to Jamaican music, and can finally hear all of his music that has been out-of-print for decades. Bring back The Prince!

Roll on Charles Street features Buster productions and performances from 1961 through 1966, a good number of which are previously unreleased tracks or unreleased alternate takes, and the music ranges from swing jazz (check out the unreleased "Pink Night" with solos by Baba Brooks, Roland Alphonso, and Lester Sterling; or the unreleased version of Duke Ellington's "Take the A Train" with solos by Alphonso, Sterling, and Don Drummond), to Jamaican rhythm and blues (see the unreleased "I'm Sorry" or Buster's cover of Huey Smith's "High Blood Pressure"), to full on ska with some or all of The Skatalites performing in the backing band (and it should be noted that all of these recordings are sourced directly from the master tapes and the liner notes and and track-by-track commentary are provided by reggae expert/historian Steve Barrow).

Ska fans have much to devour here, including Roland Alphonso's moody "Roll on Charles Street" (previously unreleased); the lovely Derrick Morgan and Patsy (Millicent Todd) duet "Raindrops are Falling" (unreleased); the original and hard to find--and apparently Buster-penned--"Stop that Train" by The Spanish Town Skabeats (AKA The Spanishtonians); the Buster All Stars' jaunty "Charles Street Cowboy" (unreleased) and an alternate take of their powerful "Prince of Peace" instrumental; and two ace Don Drummond performances with The Skatalites, "Sudden Attack" and "Vietnam" (both tracks surprisingly bright and upbeat, given their titles).

Obviously, Roll on Charles Street is an essential release for Prince Buster fans to pick up, but really anyone interested in '60s Jamaican ska should have this in their collection.