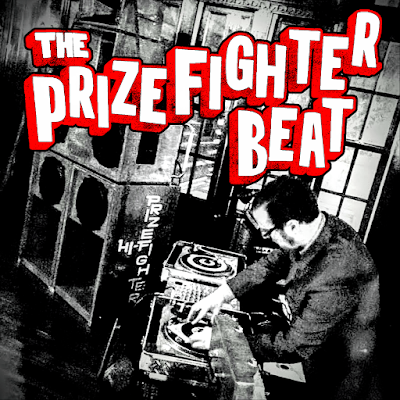 The awesome new single from Minneapolis' The Prizefighters--"The Prizefighter Beat" b/w "A Fistful of Credits"--has an interesting back story to it. "The Prizefighter Beat" was one of the band's first, never-quite-finished compositions from back in 2006 that was occasionally broken out for encores over the years when they were out of other songs to perform. At some point, this band theme song became a sort of inside joke between The Prizefighters and some of their oldest, diehard fans, who would shout out requests for it during gigs. But The Prizefighters just never got around to completing/polishing up the track and committing it to tape.

"The Prizefighter Beat" is a terrific, spirited vintage ska cut (featuring sweet upright piano and trombone solos) that is essentially about having a great time dancing to live ska music (and you'll have a hard time resisting the urge to grin and move your body to this riddim!): "People get ready, we're in for a fight/Don't need no gun, no you don't need no knife/Listen to me, this is all that you need/Fire in your soul and the soles on your feet/Let's get a bit rocking (yeah, yeah, yeah!)/Everybody moon stompin' (yeah, yeah, yeah!)/Let's get a bit movin' (yeah, yeah, yeah!)/Everyone gets groovin' (yeah, yeah, yeah!)." With a song like this in your corner, surely you can't be defeated! The b side is the wittily titled "A Fistful of Credits," a fantastic, spot-on spaghetti Western reggae take on the theme song to the "Have Gun--Will Travel"-ish "Star Wars" universe series "The Mandalorian." (Somewhere out there, Jason Lawless is smiling.) Hopefully, both of these tracks will make their way to vinyl some day--they're more than worthy of it!