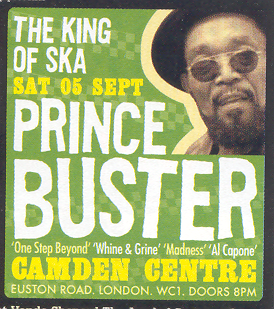 According to an ad in the April 2009 issue of Mojo, Prince Buster will be performing at Camden Centre in London on September 5, 2009. I wonder if this means that the new album (titled "Subliminal Reaction"?) he is rumored to have been working on is going to see the light of day soon. With 2009 marking the 30th anniversary of all things 2 Tone, and versions of The Specials, The Beat, The Selecter, and Madness all roaming the British countryside now and in the near future, it would seem like an optimal time for The King of Ska to drop some musical manna upon us, right?

(It would be incredible if Prince Buster would do a New York gig, but I suspect that the promoters here don't believe he'd be that big of a draw and probably would refuse to meet his asking price to perform... They'd be wrong, of course.)

Also at the Camden Centre, on Saturday, July 18, is a bill celebrating "30 Years of 2 Tone" featuring The Beat (Ranking Roger's UK edition), the Neville Staple Band ("playing the music of The Specials"), and Pauline Black (obviously of The Selecter).

Here's a reminder that Madness' new album The Liberty of Norton Folgate will be released in the UK on March 2, and the band will be playing dates in Australia and England this spring and summer.

And speaking of The Prince...

Madness
"The Prince"
Posted by Steve from Moon at 10:42 PM

Email ThisBlogThis!Share to TwitterShare to FacebookShare to Pinterest
Labels: Madness, Prince Buster, The English Beat, The Selecter, The Specials

Nice music video, Steve! Time for me to wipe the dust off some Madness albums! I was just thinking the other day how Madness was clearly the most commercially successful ska band of the 2 tone era. Heck, they even had a Madness inspired commercial for Colgate in which kids are jumping around and skanking while singing about why toothpaste is good for you to the melody of Baggy Trousers! You must see it to believe it! http://www.youtube.com/watch?v=gdcVRueT2cw

Respect Duff! do you have a contact for Prince Buster? I would be interested in bring him to the bay area for a couple of shows.

Thanks for your comments, Ray!

Madness is all in the mind!

I don't have a direct line to the Prince, but I would try contacting the promoter for the Camden Town show (the link is in the body of the post) in order to track him down.

Hope it works out. Can you put on an NYC show, too?

Wow, I'm so glad I ran across your page. I am actually going to be in Camden on that date. Seeing Prince Buster like most americans has only been a dream. Thank you

Hey! That's great (I'm jealous)! After the show, let us know how it all went--post a comment or send me an e-mail)!

Hey guys, Question for anyone, can some please please tell me where i can find either some ska shows or even places that play this sort of music in the london area?? Looking at going out this weekend Aug 1st and 2nd and feel like alittle 2tone...thanks guys. email me if you can at davey_boy86@hotmail.com
Again cheers
Dave