Ska Splash: A Toasters Reunion (of sorts) and The Return of The Citizens! 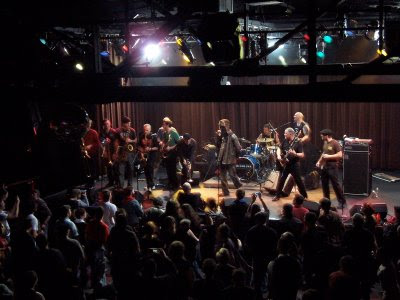 Sorry to report that this is not a proper show review--more like notes from the gig--as my night was split between catching the bands in action, downing some beers, and blabbing with various scenesters. So it goes.

First off, The Toasters put on a extraordinarily strong show, with Buck handling all of the vocals (I don't think I've ever seen him do that...there's always been either Vicky, the Unity 2, Cashew, Pablo, Coolie, Jack Ruby, Jason, and more over the past 25+ years to share in the vocal duties). They played most of the standard hits that you'd expect ("East Side Beat," "Shocker"), plus some of my favorite cuts that I haven't heard live in ages including "Go Girl" (with one of my favorite New York City-centric lines: Danceteria was where you could find her/and at CBGBs she could be seen/or at any club you've ever been...) and "History Book."

The real news of the night was the mini Dub 56-era Toasters reunion! Towards the end of The Toasters set, Ska Splash promoter (and ex-Skatalites manager) Shay Vishawadia literally shoved a "I'm just visiting" Coolie Ranx on stage to toast during one of the band's encores. "Rocksteady" Freddie Reiter (who played a terrific set earlier that night with his NYSJE) was already up there with several other brass players for the usual "Matt Davis" horn-a-thon. The crowd loved it, of course! (In the photo above, Coolie is center stage in bomber hat, Buck to the right, and "Rocksteady" Freddie is four horn players in from the left.)

That night we also experienced a "Life on Mars" flashback to 1989 or so with the appearance of two of The NY Citizens! Recently, I've been in touch with Chris "Kid Coconuts" (or "The Kid") Acosta about an interview he and Dan "D.C." Marotta are doing for The Duff Guide to Ska (which hopefully will be up soon...). In one our e-mails back and forth, I mentioned that Buck and The Toasters were playing a gig soon and that I was planning to go, blah, blah. Nevertheless, I was kind of shocked when I spotted both of them talking to Buck by the bar (he later gave them a shout-out from the stage and dedicated "History Book" to The NYCs). I've got to say that it was pretty cool to see some of the key players from the early NYC ska scene all in one place this many years out...

(In the photo below are "The Kid," Buck, and D.C. Marotta, left to right, after The Toasters set.) 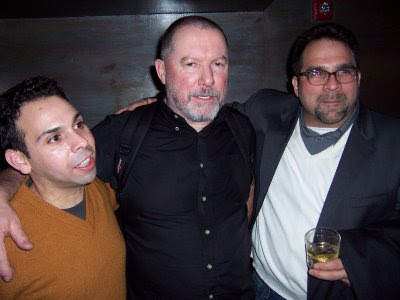 All of the other bands on the bill that night--NYSJE, Westbound Train, Dave Hillyard, Hub City Stompers, and Across the Aisle--put in good to great performances (with HCS unleashing a palpable, menacing charge in the air during their set).

It may have seemed like a good idea beforehand, but this type of activity really should really be discouraged. During Westbound Train's set, singer and trombonist Obi Fernandez stopped the show so some some guy could come on stage, grab the mic, and ask his lady friend to be his wife. Thing was that the dude was stone cold drunk and could barely spit out his proposal, let alone stand vertical. Thankfully, she said yes, and the world started spinning again. The whole travesty was no doubt videotaped--but should never be viewed by the grandkids or the bride-to-be's parents.

I do wonder if it has made it to You Tube yet...

Thanks to Buck, Shay, and Jeremy for their hospitality. Congrats (twice!) and godspeed to Brett and his wife.

Jer, we'll hang out more the next time you are in the NYC.