Duff Review: Captain Black No Stars versus Rasta4eyes--Boss Sounds of the Boom & Bust 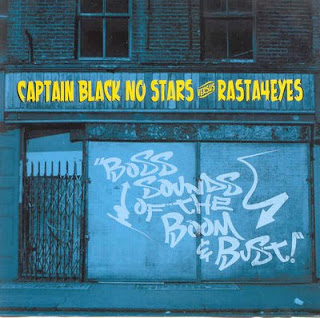 While the concept of the split EP isn't executed as elegantly as it once was in the pre-digital age (i.e.: a slab of vinyl that features one band on side 'A', then you flip over the record to hear tracks from the other one), it's still a nifty way to release material from new, untested ska bands (and massive props go to Kevin Flowerdew and Do the Dog Music for so strongly supporting the exploding UK ska scene). On Captain Black No Stars versus Rasta4eyes' "Boss Sounds of the Boom & Bust," which features four cuts from each, both bands are more than deserving of this showcase (and of your hard-won cash), though Captain Black No Stars edges out Rasta4eyes in this reggae/ska sound clash (and there's the downside of the split EP: one of the bands may outshine the other). Having said that, I eagerly look forward to hearing new material in the future from both acts...

With a singer that sounds like Mick Jones, Captain Black No Stars' style of punky dirty reggae reminds one a bit of The Clash's excellent forays into Jamaican music on London Calling and Sandinista. The great "Rivers of Blood," which versions Toots and the Maytal's "54-46 (Was My Number)," isn't as apocalyptic as its title suggests--it's about the boneheaded lawlessness in the singer's neighborhood (and government's inability to do anything about it) keeping him housebound--literally locked in like a prisoner, get it? "The Lighter Song" laments the fact that people aren't really free to do what they want in public, including smoke, drink, and enjoy a joint. "As Zac Says" is a cool, mid-tempo skank that seems to be warning everyone to be skeptical and aware of the hidden agendas behind the carefully controlled images and messages that pour out of our televisions and movie screens daily (can someone please post this band's lyrics on the net--I can't make all of their words out and think they have loads of relevant things to say). "Dub MPLA (Revolution Party)" is stellar cover of Tapper Zukie's classic track.

Rasta4eyes also turn in a good to great set of horn-filled, post-2 Tone ska with songs about seeking enlightenment ("Oscar & Arthur"); dealing with the never-ending cycles of crappy jobs and unemployment (the cutting "Good Old Rock N Roll"); the singer's over-the-top obsession with, and difficulties in, tracking down, buying, smoking, and--in an ideal world--growing pot ("The Herb"). The stand-out track is "Never Will I Pay" with its catchy keyboard and horn hooks, though the song is joyously defiant about not paying a dealer for pot or the government for taxes owed (even if it cuts into his dole payments). While the music on this track is top-notch, it may not be in your best interest to take its message to heart.

Both Captain Black No Stars and Rasta4eyes are proof positive that exciting things are happening on the UK ska scene--though based on the dark tenor of all of these songs, I can't say the same for the state of Her Majesty's nation.

Email ThisBlogThis!Share to TwitterShare to FacebookShare to Pinterest
Labels: 2 Tone, Captain Black No Stars, Do The Dog Music, Duff Review, Rasta4eyes, The Clash, Toots and the Maytals

Lyrics on the way. Thanx for the review.

My pleasure! Thanks for forwarding the lyrics. As you can probably tell, I like words.

Best of luck to you and CBNS!