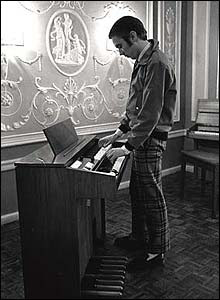 It's safe to say that even if The Specials had flamed out after their debut album, Jerry Dammers would have been canonized by the music industry and press for his extraordinary accomplishments with the band (both sound and vision) and the 2 Tone label. But after the enormous success of The Specials, which made it challenging to live up to everyone's stratospheric expectations for whatever the band did next and difficult for The Specials' music to evolve organically, Jerry's bull-headed determination to fulfill his artistic vision mostly frustrated his collaborators and sometimes baffled The Specials' fans--yet his results were (and still are) oftentimes brilliant.

The muzak-influenced More Specials, a radical tinkering with their enormously popular sound, but one that is not without its own highlights ("Do Nothing," "Stereotype"), ultimately led the band to record the extraordinary "Ghost Town" EP, the pinnacle of their short career (with its bleak songs about racial violence, unemployment, and hopelessness that all too accurately reflected the terrible times in Britain). 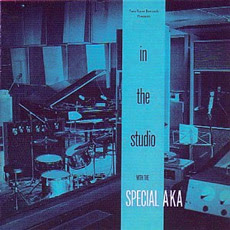 After The Specials imploded during the recording of "Ghost Town" (and the release of the truly harrowing date-rape single "The Boiler," which Jerry acknowledged was meant to be only listened to only once), it took Jerry, Brad, Rhoda Dakar, Dick Cuthell, and a rotating cast of musicians under The Special A.K.A. banner three, difficult years for In the Studio to gestate to maturity--and it wasn't even a ska album! But it was extraordinarily unique (a challenging mix of jazz, reggae, and soul that grew on you and didn't sound like anything else that was unleashed on the pop charts in 1984), claustrophobic (especially the jab at "Housebound" Terry Hall), outraged (see "War Crimes"), uncompromising (see "Racist Friend"), and yielded what may be the catchiest protest song ever, the euphoric hit "Nelson Mandela" (the one moment of pure joy on an album that often found the world to be an ugly, petty, unjust place).

A couple of decades later, we jump light years ahead--courtesy of Sun Ra--from The Special A.K.A. to The Spatial AKA Orchestra, the free-form jazz dub group the Dammers now leads (after far too many years out of the limelight, apart from DJ-ing in clubs and working for various causes). Below, you'll find an interesting review of one of The Spatial AKA's recent gigs from The Independent, and underneath that, a few viddys of the band in action.

While I'm very much intrigued with what Jerry's got going on here with The Spatial AKA Orchestra, I'm sorely disappointed by what might have been had the rest of The Specials agreed to re-interpret their hits for the present day (instead of solely meticulously recreating the sounds of yesteryear, note for note) and take the band, its music, and ska to the next step in its evolution. Thirty years out, the ska faithful deserve better.

Here's the money quote from the article:

Part of the justification surrounding Dammers' ban from the Specials reunion includes the fans' belief that he has sold out on his punk credentials. True, in playing a 15-minute-long free-jazz version of the Batman theme, Dammers has entirely broken the golden rule of his generation. But the simple fact that he has dared to do so is considerably more punk rock than the irrelevant nostalgia-fest the rest of The Specials will be laying on this summer.

Economic uncertainty, racial tension, a looming Tory government; not much has changed since the heady summer of 1979, when The Specials (then known as The Special AKA) first bounded out of Coventry.

The band's debut single, "Gangsters" – 169 seconds of ska-punk vitriol aimed at a failing fat-cat establishment that, quite frankly, could have been written about Fred the Shred and his band of bankers – rocketed to number six in the charts, a perfect soundtrack to Britain's growing social unease. Perhaps that's why six former members of The Specials decided to re-form this summer – to cash in on the nation's contemporary discontent.

However, Jerry Dammers' invitation to the party was swiftly revoked after he voiced his intention to rework some of the old classics, meaning that on their 30th-anniversary reunion tour, The Specials will be without the man who wrote most of the songs and hand-picked each band member.

Still, perhaps it's for the best, because while the other members of The Specials have been supping pints at ska and scooter festivals since the bulk of the band's demise in 1981, Jerry Dammers has been experimenting with jazz and afrofuturism.

His Spatial AKA Orchestra (geddit?) were initially formed as a kind of tribute to the cosmic free-jazz pioneer Sun Ra, whose space-themed big-band music fills much of tonight's set.

Coming on stage dressed like Ancient Egyptian wizards, the 18 members that make up the orchestra look like something out of Bill Bailey's darkest nightmare. Among their ranks are Mercury Prize nominees Denys Baptiste and Zoe Rahman, on saxophone and piano respectively, BBC Jazz Award winner Finn Peters on flute, and 1960s free-jazz icon Larry Stabbins, again playing sax.

After a spoken-word introduction from the Trinidadian poet Anthony Joseph, the orchestra erupts into a wonderful, swirling wall of sound. Rather than simply recreate the music of Sun Ra on songs such as "It's after the End of the World", Dammers and his band completely reimagine them.

Tonight is a tribute not just to Sun Ra but also to his peers and influences. Martin Denny's exotic "Jungle Madness" gets a solid turning-out, while Alice Coltrane's dark and pounding "Battle at Armageddon" provides the night's most memorable moment, when Patrick Illingworth performs a truly breathtaking three-minute drum solo.

Part of the justification surrounding Dammers' ban from the Specials reunion includes the fans' belief that he has sold out on his punk credentials. True, in playing a 15-minute-long free-jazz version of the Batman theme, Dammers has entirely broken the golden rule of his generation. But the simple fact that he has dared to do so is considerably more punk rock than the irrelevant nostalgia-fest the rest of The Specials will be laying on this summer. Jerry Dammers as a cosmic free-jazz progressive? How times change.

Email ThisBlogThis!Share to TwitterShare to FacebookShare to Pinterest
Labels: Dick Cuthell, Jerry Dammers, Rhoda Dakar, The Spatial AKA Orchestra, The Special AKA, The Specials

Great post. I thought everything's already been said about the Specials, but you found a way Duff!

Thanks, Coozer! I tried to come at it all from a bit of a new angle!