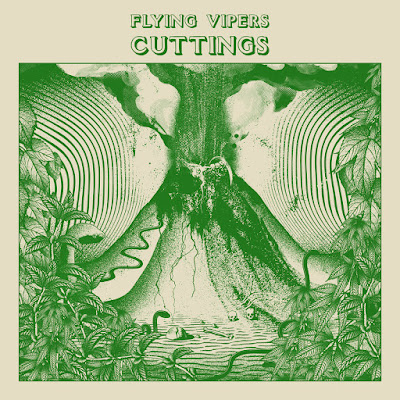 Back in the mid-nineties when I ran the Moon Records promo department out of a bedroom in my apartment (with my assistant and an intern or two), I often played dub albums (loads of Lee "Scratch" Perry after reading an extensive overview/ranking of his recordings in the Beastie Boys' magazine "Grand Royale"), as the rhythms and melodies would help keep us working at a steady pace without being too intrusive or overpowering. While I'm certainly not implying that dub is akin to background music a la Muzak, it is great music to play either while doing something else or when taking the time to do nothing but be alone with your thoughts. If Flying Vipers' Cuttings had been available back then, it would have been in heavy rotation on the office stereo, as well as during the off hours.

After releasing a series of superb cassettes (The Green Tape, The Copper Tape), and physical and digital singles ("Highest Region," "Nervous Breakdub (Pandemic Version)" b/w "PMA Calling") over the past few years, Flying Vipers have finally issued their first long-player Cuttings, which, as one would expect, is crammed with incredibly hooky, dubby roots reggae instrumentals reminiscent of Dennis Bovell's magnificent productions and Perry's recent and awesome collaborations with Adrian Sherwood and Daniel Boyle.

Cuttings, of course, refers not only to the leaves that have been harvested from cannabis plants, but these musical fruits of the band's labors in the studio--and they have one bounteous crop here. Highlights include "Leaf Miner," which has a wonderful interplay between a rigid and relentless bass riff and a series of answering free flowing Rhodes piano lines; the prescient, apocalyptic "Two Twenties Clash" (and people thought things were bad back in '77!); the Bunny "Striker" Lee tribute "Flight of the Gorgon" with its majestic, panoramic horns; the bad-ass "Scorpio Son" and its version "Son of Scorpio"; and the supremely confident and untouchable "Puff Adder" (many of the cuts on this album are ripe for being versioned by deejays and singers--and becoming well-known riddims in their own right).

Flying Vipers are comprised of the devastatingly good rhythm section of Marc and John Beaudette (Destroy Babylon, The Macrotones), the gifted Zack Brines (Pressure Cooker) on keys, and Jay Champany (10 Ft. Ganja Plant) on percussion and the master at the analogue controls (plus ace guests on horns, sax, flute, clarinet, and binghi).

If you haven't been paying attention to this band, Cuttings is a brilliant introduction to the mighty Flying Vipers; and if you have, you're going to love this album,

I can't agree more. I secretly listen to them on Spotify (along with only about 80 others per month) and been waiting for the rest of the album to hit. 2020s clash makes me want more.