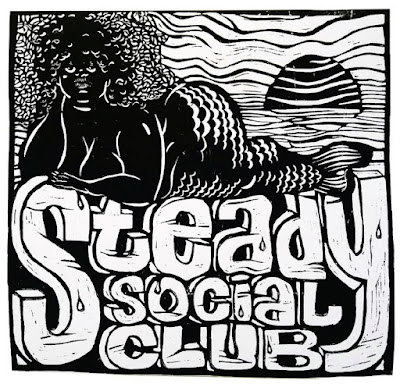 Take One is the impressive debut album from Poland's first rocksteady act Steady Social Club, and is filled with really terrific original tunes and ace performances--all recorded live in the studio on analog gear in one take, warts and all, with no edits, overdubs, etc. (hence, the album title). It should be noted that Steady Social Club are not newcomers to the scene, as members hail from other Polish and (one) German ska groups (Vespa, The Bartenders, Real Cool Sound, Big Fat Mama, and Spartan Allstars). They joke that they're ska veterans, but older now, so they play slower (hah!). And this really is a late night, end-of-the-afterparty record, when people couple or uncouple, and don't necessarily make the best decisions (practically all of the songs on Take One are about falling in or extracting oneself from a romantic relationship). The rocksteady tempos are markedly (almost stubbornly) unhurried, giving the male and female singers (Wioletta Baran, Anna Teliczan, and Boris Borowski) plenty of time to do their thing, and the song arrangements are uncomplicated, yet completely appropriate and effective (the band is rounded out by Artur Grochowski on drums, percussions, and keyboards; Bartłomiej Kościański on bass, guitar, and keys; and Maciej Januchowski on guitar, keyboards, and vocals; the later two wrote all of the tracks here).

Top cuts here include "Let's Do Rocksteady," which has wonderful harmonizing and offbeat use of male falsetto ("Let's forget all the daily trouble/Now it's just you and me together/Hold me tight, till you feel my heartbeat/All the world can come back tomorrow"); the gorgeous ballad "Magic Feeling" (which, of course, is that of being in love); and the incredibly sultry tracks "Set Me Free" (who could resist this entreaty?) and the you're-headed-for-a fall "Slow Down." "You Kept Me Waiting" is more Harry J skinhead reggae than rocksteady and features really amazing Jerry Dammers-esque organ during the chorus (the singer knows he's not ever going to get what he wants, but still can't help himself: "I'll keep on waiting/Up through the night/I'll keep on waiting/Until the dawn/Why?"). "Friend or Foe" also is excellent dirty reggae about someone getting what they're owed in a Niney the Observer "Blood and Fire" kind of way ("I say one day/You gonna pay/And the lies you've said/Will be exposed!"). Perhaps the fiercest song on the album is "There's the Door" (I'm warning you/This game won't be played be no more/It is last chance for you to change/And otherwise there's the door")--you won't be able to resist singing along with the ominous "ohs" of the chorus.

Even though I'm getting killed on the shipping costs from Poland to the USA, I need Steady Social Club's Take One LP in my collection. If you're a fan of rocksteady, you'll want this album, too.

[Update: Since posting this review, I've learned that this LP will be available in the USA through Jump Up Records.]