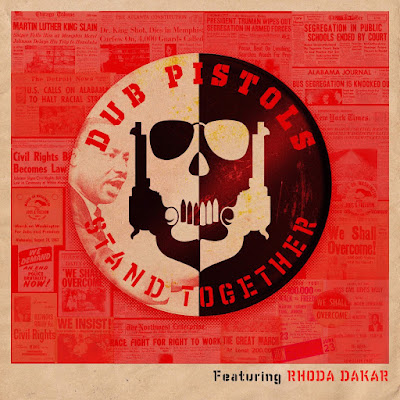 While it was not intended to address the current worldwide protests against the outrageous police killings of unarmed black people in America triggered by the murder of George Floyd, the seemingly prescient new single from Rhoda Dakar and Dub Pistols "Stand Together" could not be more relevant if it tried.

Released in advance of Dub Pistols' forthcoming album Addict (9/11/20, CD/LP), "Stand Together" is a brilliantly catchy and buoyant 2 Tone track with modern dancehall touches and echoes of Dandy Livingstone's "Rudy, A Message to You" in the horns (and was co-written by Dakar and the Pistols two years ago). In keeping with 2 Tone's fiercely anti-racist ethos (underscored in the video below), "Stand Together" is both a call for ongoing solidarity between black and white people, as well as a plea to continue building upon all of the hard-won legal and moral victories against racial discrimination over the years:

In my lifetime, I've have seen such progress
Changes that I'd never dreamt I would
Marched and challenged
Even when it's hopeless
Then the law is changed
To vote for love

[Chorus:] No matter what the problem
Unity will get us through it
It's our intent to right wrongs
We'll stand together
We can do it

"Stand Together" offers something good and uplifting for the mind, body, and spirit in these bleak times--and really should be issued as a proper physical single!

[Update: According to Rhoda Dakar, a 7" single of "Stand Together" is in the works!]

Rhoda Dakar also has a fantastic new monthly radio show on Totally Wired Radio called "Pork Pie and Mash Up," which features 2 Tone, reggae, ska, pop, and world (Mondays, 12-2 pm UK time). Her first broadcast is now available on catch up and features an interview with Barry Ashworth of Dub Pistols. Definitely give it a listen!

Also, back in April, Dub Pistols previewed their excellent cover of The Clash's "Bankrobber" with a music video (and Dakar also played it on her radio show). The "Bankrobber" digital and vinyl single will be released on June 30, 2020.

Wow, what an incredible single! Thanks for bringing it to my attention. An immediate purchase.