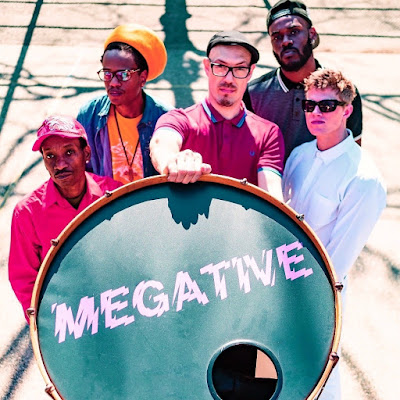 In case you missed it, Megative's self-titled debut album was one of the best ska-related releases of 2018 (this now hard-to-find LP is available through Soulbeats Records). Need a Megative teaser or refresher? Here's the first paragraph of The Duff Guide to Ska review of it from November 2018:

"Megative's tremendously good and absolutely searing self-titled debut is a concept album of sorts, focused on the breakdown or end, really the death, of everything--your own body and consciousness; inter-personal relationships; society/civilization; the sum of humanity; and the very planet that sustains us. These bleak Armagideon Time anxieties are expressed within a sparse, but powerfully realized and incredibly appealing mix of modern minor-key ska and dubby reggae (think of a mash-up of The Specials' Ghost Town EP with the Gorillaz's Demon Days or 2 Tone and punky-reggae Clash tracks given a modern, juiced-up Danger Mouse/Prince Fatty/Mungo's Hi-Fi production)."

While the band was largely off the radar during 2019, Megative had planned to release their new single "The Lunatics Have Taken Over the Asylum) this June 5 (Soulbeats Records), but delayed it until July 15, due to the worldwide anti-racist/anti-police brutality protests that erupted in reaction to the outrageous police killing of George Floyd. In its stead, Megative has issued a new video in support of Black Lives Matter--a "Lockdown" version of their incredible and highly relevant "Yeah Yeah Yeah (Yeah Yeah)" cut, which can be viewed below. Here's what we wrote about this track back in 2018:

"The one joyful and truly blissed-out moment on the entire album comes in the "They Live" referencing "Yeah Yeah Yeah (Yeah Yeah)." The verses of the song are in a minor key (as is almost every song on the record)--"The maniacs are in control/Aliens in human bodies without souls/We watch them on our screens like they're gods/And we smile while they feed us to the dogs/Now I fear I might do something rash/Watching lunatics build towers doomed to crash/They divide us up against our friends/How I long for the days when we'll all sing again..."--but everything abruptly shifts to a bright major key during the you-can't-resist-singing-along chorus of solidarity and rebellion against oppression: "yeah, yeah, yeah (yeah, yeah)!""