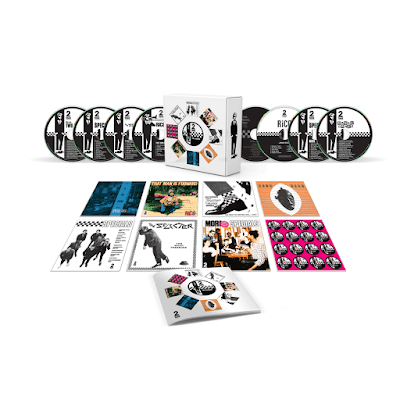 Word comes via Specials' autobiographer Paul Willo that Chrysalis Records is releasing a box set of the first eight 2 Tone albums as a CD box set on September 4th, 2020. Titled 2 Tone: The Albums, this collection comes packaged with mini-LP sleeves, a 24-page booklet with liner notes by Jason Weir and Peter Walsh, and contains The Specials' The Specials, The Selecter's Too Much Pressure, The Specials' More Specials, Dance Craze, Rico's That Man Is Forward and Jama Rico, This Are Two Tone, and The Special AKA's In the Studio. The retail list price will be £32.

Of course, the majority of these albums have been previously released on CD, but 2 Tone fans may still be enticed to pick up this set, as this edition of Dance Craze restores the Madness tracks that were excised from previous CD reissues and for the fact that Rico's Rico Jama has never before been available on CD outside of Japan.

All details can be found at Paul Willo's FB post.

Lastly, this box set is not being released in the USA or Canada, so you'll have to mail-order it from overseas if you live in either of those countries.

Update (7/2/2020): This box set is now available to pre-order through the official Two Tone store; a related t-shirt can be had, too.