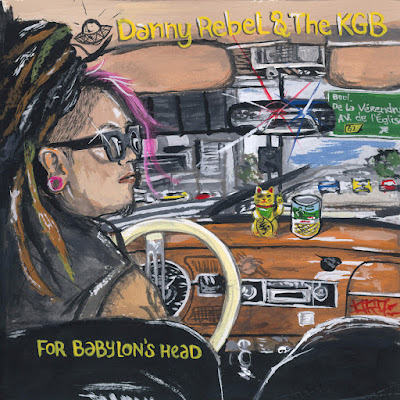 If you aren't into American hardcore and punk from the first half of the 1980s, you might miss that the cover artwork for Danny Rebel and the KGB's new EP For Babylon's Head is a brilliant take on the Minutemen's 1984 Double Nickels on the Dime cover photo--and that this punk-hardcore-art rock-jazz masterpiece contains 45(!) tracks on two LPs filled with left-wing commentary on racism, war, working-class life, and more. Like that Minutemen album, the tracks on DRKGB's For Babylon's Head deal with the gentrification and destruction of a diverse, working-class neighborhood and tangling with lawless, racist cops (the one big difference between Danny Rebel's painting and the Minutemen's photo is that in the former, we see the police car lights in the VW Bug's rear view mirror, while in the latter, it's bassist Mike Watt's smiling eyes; also, note how Rebel has artfully snuck in references to his band's first two albums!).

With its Old Testament echos of the Israelite siege and destruction of Jericho and its wicked inhabitants, "St Henri Wall" is part rocksteady track, part spiritual aimed at the predatory capitalist developers and gentrifiers in this Montreal neighborhood who are representative of Babylon's evildoers: "This wall is bound to fall/St Henri Wall is gonna come a tumbling down/I don't think they know/How we gonna break this wall down/I don't think they know/How we're gonna fizz the fire/Babylon better run/Run, run, run Babylon." This incredible track is versioned in "Wall Dub."

"Another Song About You" is a sparse but positively seething acoustic cut about police racial profiling, harassment, and murder (they're Babylon's enforcers) that's powerful and emotionally devastating in its musical simplicity and lyrical directness:

Another song about you, Mr. Man
Another death in the streets from your hands
Another scream of anger
In the end, it's all noise

Lights of blue and red
Once again, in my car
Another random check
That's the third time, so far
"I'm not supposed to feel you"
Yes, that's what you're trained to do

Maybe it's the color of these eyes
That you want me to die
Maybe it is written in the Book of Rules
Who to call
About the cause of all this murder?
If I was a criminal
You would see a bullet through those eyes

Both of these songs are protest music at its finest (deeply meaningful messages delivered within exceedingly catchy tunes). We're all living through some truly awful times, but Danny Rebel and the KGB are helping to provide a soundtrack for the downtrodden and oppressed that pushes back against the powers that be--and maybe even provides some hope for better days.