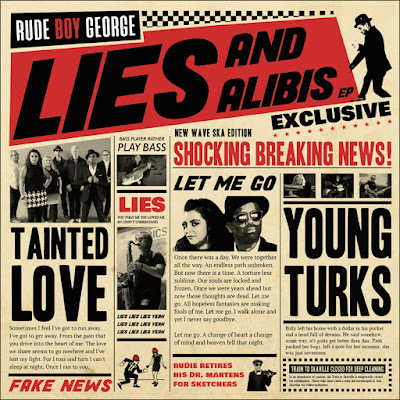 [Disclaimer: I was a co-founder of this band, but left five years ago.]

Lies and Alibis marks Rude Boy George's fourth EP of ska and reggae versions of new wave hits--and it's another really fine and fun collection of tracks from this ace band of NYC-area ska veterans (Bigger Thomas, Hub City Stompers, Heavensbee). This time out, RBG focuses on early '80s synth-pop from Heaven 17, Thompson Twins, Soft Cell, and...Rod Stewart? Released in 1981 on Tonight I'm Yours, "Young Turks" was the Rod's quite successful bid at gearing some of his music to the popular new wave sounds of the day (and made it to #5 on Billboard's US pop charts). Rude Boy George's take on it is a vast improvement on the original--but, still! (Can I refer to Stewart's original as "cod new wave"?). The other choices of songs are impeccable, particularly Thompson Twins' "Lies" and Heaven 17's "Let Me Go," both of which are given a shiny pop-ska sheen.