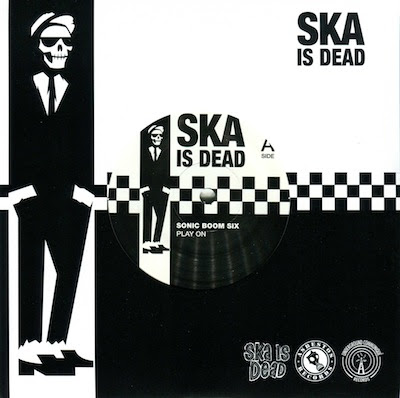 For ska fans who value and collect recorded music in tangible formats (particularly 7" vinyl singles!), these are once again becoming The Best of Times. Rebelling against the instant-gratification dominance of easily disposable-erasable-pirated digitally downloaded music, the fantastic Ska is Dead 7" of the Month Club has been issuing a series of limited edition split vinyl singles (on seriously thick black and white wax with cool, printed outer sleeves--love the tattered Walt Jabsco zombie!) from top shelf ska bands of all stripes (i.e.: vintage ska, 2 Tone, ska-punk, etc.). All of the featured cuts by these bands are new or unreleased--and this is the only place to find 'em, as they will not be released in any other form! (The Ska is Dead 7″ Club is a joint effort between Dave Kirchgessner of Mustard Plug and his Ska is Dead tour company, Asbestos Records and Underground Communique Records, that combines their collective obsession with dead genres and dead formats.)

Here's The Duff Guide to Ska review of the December 2010 batch of Ska is Dead singles:

On "Play On"--which is about how music can help one endure, even thrive during, trying times--the usually punky-dubby-hip hoppy Sonic Boom Six (from Manchester, UK) sound like a cross between a 2 Tone-era Selecter and Bodysnatchers' descendants The Deltones (dig the 60's girl group harmonizing!). Laila Khan sings, "Well on my shoulder feels the weight of the world/Chasing my tail takes a toll on my soul/You salve my soul, such a sweet sensation/Show me the way I let my wings unfold...take me home into your song/So won't you sing another song for me now?/'Cause I got to feel the music somehow/Won't you sing another song for me now?/and though the band is gone/Still the song plays on..." This is one awesomely catchy tune.

Long Island's The Nix 86 crank up the volume and energy to 11 with their melodic and anthemic Cheap Trick/Bosstones-like rawk-ska on "Peter Pan Syndrome." The ska traditionalists are probably not going to dig this cut, but ska punkers and those with broader tastes will find a lot to like here.

Sounding like a Dammers/Strummer/Jones track that should have been, head Slacker Vic Ruggiero teams up with New Orleans DJ/rocksteady queen Maddie Ruthless (and backed by The Forthrights) with spectacular results on the world's treading on me "Policeman" (which Vic and Tim Armstrong originally did as The Silencers' contribution to the Give 'Em the Boot comp back in 1997): "My mind's so complex/I can't put my finger on the trigger to control all this stress...I've got my mouth wide open and my eyes closed shut/when the policeman kicks me in my head." Is this what it was like back in the late 70s to hear The Specials or The Clash for the very first time?

The Forthrights' "Carla" is a bright, jaunty, and knowing ska ditty (with a dash of country, courtesy of the the guitar line) to a member of the fairer sex: "Now, I'm not one to talk/but what we did last night/What we did in the dark/I wouldn't speak of in the light/So you like talking/Dancing 'till dawn/Not to be too forward/But won't you take me home?" Another winning tune from a band that can't be beat!

The Duff Guide to Ska Grade (for all of these singles): A

I'll be reviewing the Big D & the Kids Table/Brunt of It and Mustard Plug/The Beatdown singles soon!

If you're interested in subscribing to this limited edition 7" record club (there are only 550 copies of each single printed--there are no digital downloads, so break out yer pop's turntable!), visit skaisdead.bigcartel.com.

Upcoming: Reel Big Fish, Tip the Van, The Slackers, Bomb the Music Industry
Posted by Steve from Moon at 4:15 PM

Email ThisBlogThis!Share to TwitterShare to FacebookShare to Pinterest
Labels: Duff Review, Maddie Ruthless, Mustard Plug, Ska is Dead 7" of the Month Club, Sonic Boom Six, The Bodysnatchers, The Bosstones, The Deltones, The Forthrights, The Nix 86, The Selecter, Vic Ruggiero

That maddie/vic track is out of control good! Pretty sure it's also The Forthrights backing that tune

The Beatdown song in the series is also SO good. Catchy as hell, picking up right where One Night Band left off.

I can't go more than a day or two without playing something from this series.

Thanks, Jake! Yes, I now remember hearing that it is The Forthrights on the Vic/Maddie track (so I'll add that to the review!).

I'm reviewing The Beatdown next. You need their new-ish album if you don't already have it.