Bigger Thomas and The English Beat at the Sellersville Theater, plus New Free Beat "Mirror" Remix! 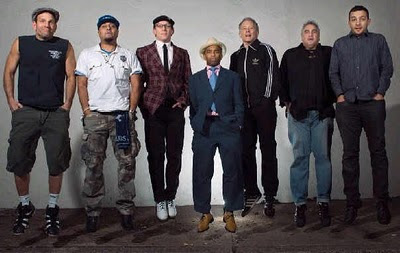 Despite Google Map's attempt to get me lost on some dark, twisty back road in rural Pennsylvania (damn you, Google Maps!), I found my way down to the terrific Sellersville Theater yesterday for my DJ gig at the sold-out Bigger Thomas/English Beat show. For a trip that started out with a lot of wrong turns (in addition to the lack of clearly marked roads, the transformer on my mixer's power cord died--but the theater's awesomely nice sound guy Dan rigged things up so I could use his sound board as a substitute mixer), it ended up being a fantastic night.

Bigger Thomas (pictured here) is big in these here parts (their last gig at the Sellersville Theater, a benefit for Haiti this past spring, was also sold-out) and put on their usual spectacular show. The Rudie Crew's Roy Radics was also on hand to sing and chat, and he and Roger Apollon Jr. performed "Radics & Roger A Chat" (off Steal My Sound) live for the first time (it was so good that it deserves a regular spot in their set from now on).

I haven't seen Dave Wakeling perform since General Public debuted at the old Ritz in New York City ('84 or '85), so it was kind of surreal to catch up all these years later. (The Beat will always have a special place in my heart, as their music helped buoy me in my teen years when depression threatened to pull me under.) The ska fans attending the 2011 London International Ska Festival are in for an incredible show. Dave's backing band is exceptionally tight (they should be, since they've pretty much been touring the US non-stop over the last few years) and all the hits sound just as good and fresh as you want them to. For me, the neck-hair-standing-on-end moment of The English Beat's set was when "Hands Off She's Mine" segued into The Congos' "Children Crying" (which is one of the greatest songs in the history of music, hands down)--it was absolutely phenomenal. (And there is a cool Beat-Congos connection--The Beat's label Go Feet re-issued The Congos' Heart of the Congos in 1981, at a time when it was hard to come across copies of this reggae masterpiece--Island balked at releasing it in 1977, so producer/mad genius Lee Perry gave it a very limited release on his own label in JA; before the show, I had actually thought about playing "Children Crying" before The Beat's performance, which I had in my crate, but ran out of time...)

The English Beat are playing the Highline Ballroom in Manhattan this Sunday (1/9/11). WNYC has a preview of the show, as well as a free download of an exclusive, unreleased 2011 re-mix of "Mirror in the Bathroom" titled "Mirror Mirror." You can also listen to the track here:

(A big shout out of gratitude to Bigger Thomas for inviting me to tag along and DJ their party--and thanks to the Sellersville Theater staff and crew for being such kind and gracious hosts!)

Update: here's a nice review of the show from the Tri-State Indie, plus a photo gallery of shots from the show.

Another Beat/Congos connection, the Congos sang the backup vocals on Doors to My Heart.

Thanks for adding that, KJ! I think I had that fact floating around in the back of my head...