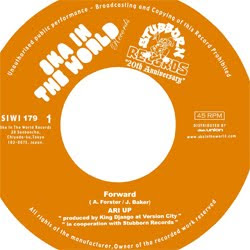 This stellar single from the late Ari Up (of The Slits) is the second co-release from Ska in the World Records and Stubborn Records that is being issued in celebration of the latter's 20th anniversary (the other is King Django's "Anywhere I Roam" b/w "Career Opportunities"). King Django co-wrote (as well as played/programmed and produced) the two tracks here with Ari, which were recorded at the Version City Studios in April 2003. Anyone expecting Django's usual traditional ska/rocksteady sounds should have their head checked--this is the spectacularly unique post-punky-reggae musician Ari Up (AKA Madussa, which was the name she used when performing dancehall reggae in the mid-2000s) we're talking about here (though it won't surprise anyone who's aware of Django's forays into contemporary reggae and has picked up the dancehall singles on Stubborn imprint Version City Records from Prince Alla, Johnny Osbourne, Pampidoo, and others). This single is trippy electro-dancehall--and while I'm no expert in this sub-genre, I know what I like and know that this is damn good.

"Forward" is a personal and political plea-cum-directive for sexual/romantic partners to cut the crap and posturing in favor of honesty, transparency, and trust (the not-so-subtle subtext is to practice safe sex and be tested for HIV): "Let's go forward/I tell you not reverse/Me check for you/but I must love you first/But for to love you/me have to know you/Just like you should love me and know me, too...Me must take time/and think twice/Rush into things/don't want to pay the price/The price me might pay might cost my life..." In other words, wrap that rascal (and know your status) or there's no action. Sound public health advice, indeed.

"Rescue Mission" seeks to save the citizens of Jamaica, Ari's adopted (and true) home country, from its nation's grinding poverty and dependence on America's foreign aid handouts (with its many thorny strings attached): "Prices going up and we going down/If we don't protest and make some sound/Soon there be no left around...We raise, we raise the whole of Jamaica/We grow, we grow/with everyone there-a/Resurrect the dead and kill the living/When them a hear this bad boy riddim!" Kingston calling for Occupy Jamaica almost a decade before it breaks out in NYC...

I'm not really going out on a limb with this, but it's worth stating the obvious: Ari Up was one of the truly fearless and boldly unique musicians and personalities in the punk and reggae scenes--and this single is terrific way to remember and honor her talent and legacy.
Posted by Steve from Moon at 12:28 AM