Duff Review: The Rudie Crew "This is Skragga" 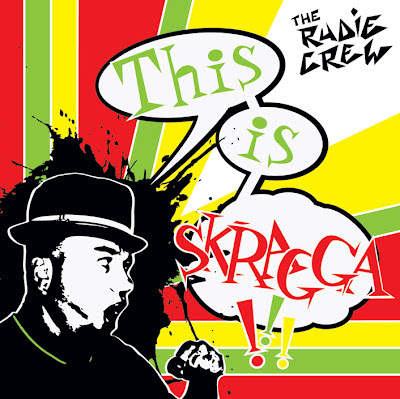 When you hear The Rudie Crew's powerhouse amalgamation of hard-edged, aggressive, and minor-key (but definitely catchy) ska and reggae and wonder why it's like nothing else on the NYC ska scene--everything registers when you trace the band's lineage to King Django's fearlessly eclectic ska band Skinnerbox (established in 1989), which (hey!) included The Rudie Crew's saxophonist/songwriter El "Wood" Husey and trumpeter/songwriter Dan Dulin (both were also in the more traditionally-minded Stubborn All-Stars). The Rudie Crew's sound strongly reminds one, but not in a throwback way, of the late 80s/early 90s NYC ska scene (still heavily influenced by 2 Tone, post-punk, and New Wave), when ska music wasn't so rigidly defined or dominated by traditional ska and rocksteady forms. Top bands like The Toasters, The NY Citizens, Urban Blight, Bigger Thomas, Mephiskapheles, and Skinnerbox mixed their bluebeat with doses of hardcore, funk, 50s rock, Stax R&B/soul, calypso, dancehall and more--all of which gave the music space to expand, mutate, and stay vital.

Lyrically, The Rudie Crew have some interesting things to say (actually, a lot to say--most songs clock in around 4 or 5 minutes, and Roy Radics works overtime, oftentimes toasting/singing what seems like several hundred words a minute). "TRNC" is in support of the Turkish Republic of Northern Cyprus's independence--something I was vaguely aware only because I was briefly in Cyprus as a kid in 1974 ("TRNC, you've got to set them free/TRNC, they need the economy/TRNC, go back to the EEC/ TRNC, they need to exist!"); "S.U.V." promotes an anti-greed, pro-environmental message ("SUV, this is not a necessity"); "Propaganda" blasts W's use of it to dupe the nation into a needless and disastrous war in Iraq (and includes an "Inspector Gadget" riff); all the real and imagined horrorshow anxieties of the post-9/11 decade are manifest in "Uneasy Feeling" ("The whole world is reeling!"); and the almost psalm-like "Dem Never Know" (with P-Dub) is about the struggle against oppression and adversity in Babylon: "Dem never know/There's no way they can stop me/'Cause everywhere I go/It's only Jah Jah a guide me/In each and every thing I do/Me keep him love there beside me..."

But the Crew isn't all seriousness and righteous fury. The magnificent "Tottenham Flow" is about the band's love for the Tottenham Hotspurs football club; "Pretty Girl" poses the key question, "If I give you my heart/Would you give me your world?"; and "Crisp Biscuit" celebrates The Rudites' musical prowess. Plus, the CD includes a slew of dubs, including a sweet one for "S.U.V." made by Crazy Baldhead.

The Rudie Crew know what they're doing--and they do it extremely well. Live on stage or captured in digital bytes, The Rudie Crew are not to be missed.