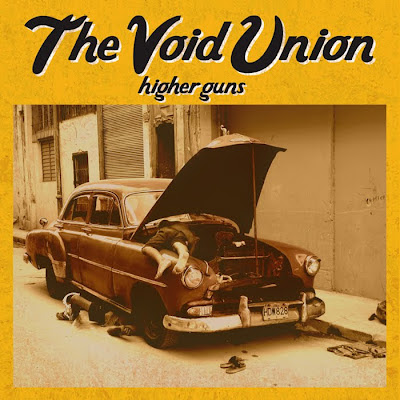 Editor's note: I had originally planned to include this review in a huge "Best Ska and Reggae LPs of 2011" wrap-up, but never got around to finishing it, as I started a new job at the beginning of 2012. So instead of letting it languish in my to-be-published someday folder, I've decided to overcome my embarrassment about posting this so late and to share it with the world...

Hands down, The Void Union's Higher Guns is one of the best traditional ska albums of 2011. Side A is all ace Skatalites-inspired original jazz-Jamaica instrumentals (see "In Like Flynn," "Song for Lester" or the spaghetti Western-ish "Higher Guns"). The flip side features "Aiming," a song about trying to drink your troubles away, but only creating more (with King Django and Obi Fernandez); "Tea Party Girl," which is probably the first ska song about the ridiculous Tea Party ("Angry girl having the time of her life/Tea Party Girl hold the knife/Angry man hold the sign/Tea Party Man hold the line"); the sweet, bubbling toaster "Rock the Junction" (with Craig Akira Fujita of Pressure Cooker); the angry and defiant "Garden of Eden," which features the amazing lyrics, "tie my hair up in barbwire and bows/top it off with a red, red rose/doesn't matter where I'm going/I'll be there by tomorrow/entertaining faces, that's where my place is/I've been here to find what's left of humankind" (guest vocalist Haley Jane is spectacular on this cut); and "Fear of Flying," a hilarious monologue (with music) about that condition by Fishbone's Angelo "Dr. Madd Vibe" Moore, that will do nothing to alleviate your pteromerhanophobia (can't you fix it, Doc?!).
Posted by Steve from Moon at 10:02 PM