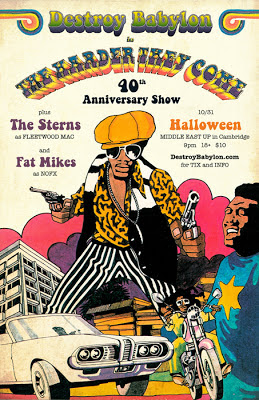 Even though I usually point out NYC area ska/reggae events, there are two very cool Halloween gigs taking place tonight far beyond our battered, but still standing, city borders...

The first takes place in the city of my birth--Boston, MA--with the fantastic Destroy Babylon, who will be performing the soundtrack to The Harder They Come in its entirety, in celebration of that album's/movie's 40th anniversary, at the Middle East Up in Cambridge! Details and tix for the show can be found here. Destroy Babylon will be sure to do these tracks great justice, so make sure to attend this show if you are anywhere near Cambridge, Mass!

If you happen to be near or in Chicago area, you have to see The Drastics, who will be performing tracks (with help from Akasha crew, Deal's Gone Bad, and MC ZULU) off their incredible MJ A Rocker EP, which came out a few years ago (The Duff Guide to Ska write up about it can be found here). 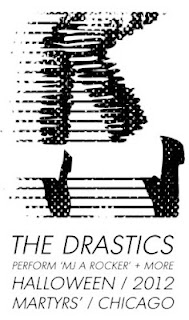 Here is how The Drastics are describing their show tonight at Martyr's in Chicago:

"We took six of the King of Pop's biggest tunes and arranged them inna Jamaican style. Imagine if Coxsone Dodd was behind the mixing board instead of Quincy Jones, and you're half-way there. We'll be adding a couple more tunes to the repertoire for this set, BUT this is also probably, most likely, for-realsy, the only time this will ever be performed live, so, ya know, don't blow it."


Much earlier this year, there had been some talk of bringing this show on the road--but unfortunately this never panned out. I would have loved to have seen it. The idea and the execution of it are brilliant!

If you're interested in a free download of MJ A Rocker, go here--and Jump Up Records still has a few copies of this on vinyl.

Bonus Halloween Treat for New Yorkers: If you're in Brooklyn tonight, head on down to Watch This Sound's "DanceHalloween" at Brooklyn Stable--Grace of Spades, Maddie Ruthless, Jah Point, Sweet V and Bats are spinning reggay way past the witching hour! Details here.
Posted by Steve from Moon at 4:09 PM

Email ThisBlogThis!Share to TwitterShare to FacebookShare to Pinterest
Labels: Destroy Babylon, Jimmy Cliff, Jump Up Records, The Drastics, The Harder They Come