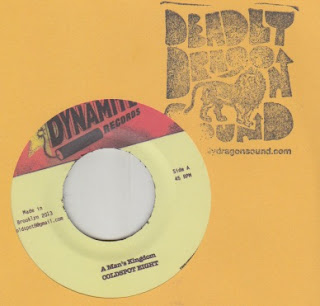 Even with members living many states apart in both New York City and Orlando, FL, the ska/rocksteady/early reggae crew Coldspot 8 still tours on occasion (as they did this past spring and summer), and records and releases excellent new music, such as the two brilliantly catchy songs here (with Jah Point on vocals, Kyle Jones on bass, Agent Jay on guitar, Matt Burdi on drums, Jack Wright on organ, Nabil Ghandour on trumpet, and Tim Schletter on sax and backing vocals). The band first formed in 1996 in Florida and issued It's the Feelgood (Beatville) in 2000 and Get on High (Stubborn) in 2005--these came out during my ska wilderness days, after Moon's awful demise, so I missed out on them the first time round (and am happy to see that they're both are still in print).

With an ice rink organ line that reminds me a bit of The Congos' "La La Bam Bam," "A Man's Kingdom" is a terrific vintage rocksteady cut about the ups and downs of playing poker. The singer believes that he's holding the winning hand--a straight with a king as a high card, only to be beaten by an opponent's straight with an ace or "stone": "A man's kingdom comes crumbling down, down, down/Now all my knights at the table they got to run from me/And all my knights at my table better run from me/Now all it took was a stone to knock me off my throne/And all it took was a stone that make me know I'm alone...I'm a rush it, I'm a gun, I'm a make it three/but you a pull it and a steal, take away from me/Takin' my money and pride, start the spark in me/and make the game catch a fire, burned the game for me/A man's kingdom comes crumbling down, down, down." The words of wisdom here are that you can't win 'em all, in life as in poker.

Featured on the recent "Brooklyn Rocksteady" documentary film soundtrack, "Skinhead a Go Pop a Collar" is a fantastic, quirky cut (love the unusual sax riff!) that's more of an observation than a "sell-out"-type criticism of how people who were once young and deeply involved in subcultures go "straight" or mainstream in order to pursue a career and/or make a lot of money (Jah Point tells me that it's essentially about "moving up in the world, from a blue collar to a white one"): "One time it was a workers' world/Next time you see the rude boy learns/So skinhead a go pop a collar/Come see how things change/Less work, more pay that's what the man say/Twelve hour days, they've gone away/Now from a night nurse, we call a doctor now/And from a man who sit on the bench, him a big judge now/See them as a doctor/See them as a lawyer/But when we stop bawling/Skinhead still come calling..." I can name several former skinheads and rudies who are now doctors and lawyers (but they definitely still love their ska music and its subculture). So it goes.

Word is that there were two other songs recorded in this session--here's hoping they see the light of day (and on vinyl) soon!