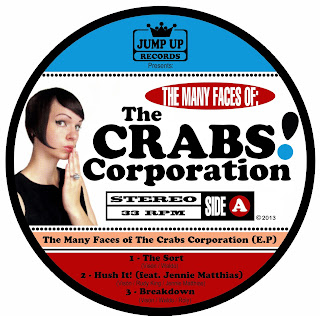 The Crabs Corporation needs no introduction if you've been following the international ska scene and been smart enough to pick up one of their three fine 45s on Record Kicks: the King Hammond-produced "Bring Down the Birds (Flying High Mix)"; "Let It Go" b/w "Reggae Power" with Jennie Matthias and Dave Barker; or their recent "Day After Day" track with Susan Cadogan (they also do a cool reggae cover of The Clash's "Ghetto Defendant" on Golden Singles Records' jaw-dropping amazing The Clash Goes Jamaican compilation, which we'll be reviewing soon).

The latest release from this stellar Argentinian band is the six-track vinyl EP The Many Faces of The Crabs Corporation, which is an fitting title, since they like to mix up their soulful, organ-centric skinhead reggae sound with elements of 60s R'n'B/funk and 80s acid jazz (exemplified here on the vigorous instrumental workouts "The Sort," "Breakdown," and "Do It!"). Ska and reggae fans should go crazy for the standout track "Hush It!," featuring one of my favorite singers, the magnificent Jennie "Bellestar" Matthias.  The song's about someone struggling with haters who just won't let a past dispute go: "On my knees/I'm begging please/For someone to listen to this story/You can never make amends/They'll make ya a criminal/until the very end/You hush it/You hush it up/Shut it/You're told to shut your mouth/Why don't you listen to the truth/When you're presented with the groove?/What does it take to make you see?/Why are you disputing me?...You refuse to give in/and the scars you left behind run so deep/Call the doctor/I'm feeling bad/Was it my fault?/Am I the one to blame?" On paper, it looks like this is an angry, bitter song, but it's very upbeat and defiant--a great cut (check out a sample of "Hush It!" in the video below)!

As for the other straight-up early reggae cuts on The Many Faces of..., "The Hard Mod Beat" is actually a peppy Dave and Ansel Collins-type instrumental with various spoken exhortations running on top ("The hard mod beat is reggae!" and "From 1969 to the end of times, is coming from the past, but is going to the future..."); while "Le Secrete" is a repurposed/versioned Jackie Mittoo cut (the fantastically slow-burning "Drum Song") mashed up with a Serge Gainsbourg-ish voiceover. Ignorant American that I am, I wish my French was much better, so I knew what exactly what was being said. But it all sounds deliciously lewd and illicit...

Thanx Steve, glad you liked it!