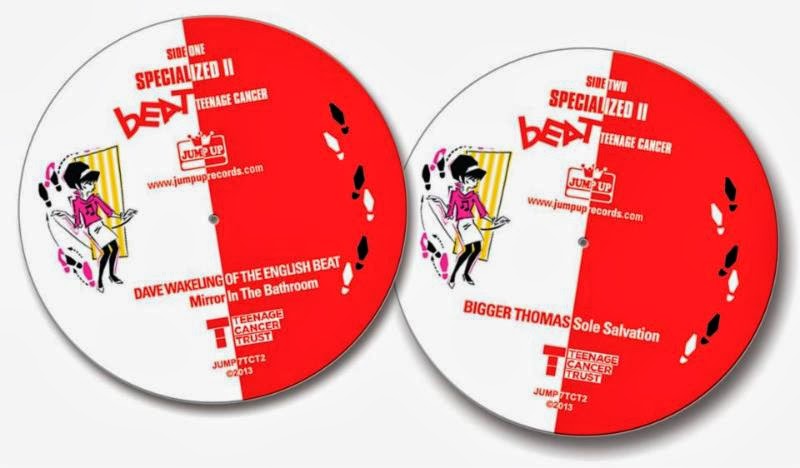 This series of terrific singles have been spun off from the Specialized II Beat Teenage Cancer CD, which is both a tribute to the The (English) Beat and a fundraising vehicle to benefit the very worthy Teenage Cancer Trust in the UK (listen here to a BBC World interview with Dave Wakeling about the project). The Specialized benefit CDs--the first celebrated The Specials--are put together by The Specials' biographer Paul "Willo" Williams and typically feature UK and US ska bands.

Shockingly, Beat Teenage Cancer is the first Beat tribute album in existence (!). How can it be that a band as brilliant and beloved on both sides of the Atlantic as The Beat hasn't been honored like this before now? Fortunately, especially in light of how tribute albums can go south quite easily (see The Clash tribute album, Burning London), the covers on these three singles more than honor the originals, while refashioning them in fantastic new ways.

The great and prolific Nick Welsh (AKA King Hammond, also ex-Skaville UK, The Selecter, Bad Manners) strips down and downshifts the tempo of "Save It for Later," which must surely be The Beat's most famous song in the USA (ever since high school, I've tried to figure out what this song is really about--apart from the jokes about fellatio spelled out in the album lyric sheet--I've heard it suggested that it concerns holding off on sex in a relationship, but I've always thought it's more of a plea to consider keeping a messy, almost completely broken relationship going instead of ending it). Nick's incredible semi-acoustic version (with slide guitar by B.J. Cole) lives somewhere between African highlife, American country, and Hawaiian steel guitar music--and transforms the song into something stunningly beautiful and unique (Dave Wakeling even mentions how much he likes it in the linked BBC World interview linked above). Nick's good friend (and sometime collaborator) Rhoda Dakar (ex-Bodysnatchers, The Special AKA) turns in a fantastically haunting version of "Too Nice To Talk To" that's a cross between something you'd hear off the trippy/dubby Massive Attack vs. Mad Professor's No Protection and the discordant no wave jazz/pop/reggae of The Special AKA's In the Studio.

The Values with Neol Davies (of The Selecter, of course) put a sweet jazzy/pop spin on one of my favorite tracks from Wha'ppen, "All Out to Get You" (though, sadly, they don't include these key lyrics that offer an escape from the paranoia and self-loathing: "Until you accept/that you’re just like the others/You’re a boy or a girl/Then a man or a woman/and your clothes never fit/and your skin’s the wrong colour/So, you make do with fear/you get more than you need/Yes, they’re all out to get you/All over nothing/They’re painting your life/in a permanent grey..."). While Lee Thompson (Madness' saxophonist, of course) doesn't contribute a Beat song--he does a weirdly wonderful spoken word (with jazz accompaniment) rendition of the Prince Buster's classic song (and his band's namesake) "Madness"--I guess the connection could be The Beat's love of Buster and their covers of his hits "Rough Rider" (actually written by Eddy Grant and his fellow members of The Four Gees!) and "Whine and Grine" on I Just Can't Stop It.

While I miss the breakneck tempo of the original, I've really come to like The Spritely Allstars' (with toasting by Ranking Roger during the dub break!) mellow, reggay-ish cover of the anti-violence track "Two Swords" ("I’ve never been one for the punch-ups/But, look, I really hate them nazis/A certain something starts to wind me up/How could I hate them oh so violently/When two swords slashing at each other/Only sharpen one another/And, in the long run, even he’s your brother/Said even though that kid’s a nazi...Are you fighting the Front, or just fronting a fight?/Sometimes it’s hard to see/the left from the right/Are we angry, are we looking for peace?/Or just tryin’ to win the war/by killing all the enemy off?/Just to kill all the enemy off?"). We should note that The Spritely Allstars includes Hunt Emerson on guitar and melodica; he, of course, designed The Beat's dancing girl logo, as well as the iconic covers for I Just Can't Stop It and Wha'ppen.

The Stiff Joints nicely convert "Ackee 1-2-3" (a children's game that is like a combination of Hide and Seek and It) from its original calypso arrangement to ska and in the course of doing so retain the unrestrained joy, optimism, and exuberance of The Beat's version from Special Beat Service (my favorite lyrics here: "Forward where the knocks are hardest/Some to failure some to fame/Never mind the cheers or hooting/Keep your head and play the game/Try to keep your feet on the ground/Without getting them stuck in the mud/You will soon be over the moon/or twice as hot as the sun!").

Dave Wakeling's new version of "Mirror in the Bathroom"--a club/jungle remix, really--has elements of it (namely, the vocals and sax) that sound so close to the original cut from I Just Can't Stop It, that I had to double-check the Specialized website to confirm that it is indeed a new recording of the song. There already are two remixes of this track in existence, found on the excellent B.P.M. ...Beats.Per.Minute compilation. So, while this isn't essential, it's another excellent versioning of this early Beat hit that's definitely worth owning (and so nice to have on vinyl!). This song is about narcissism that verges on mental illness, though the voice toasting on this remix celebrates the joys of smoking sinsemilla--which, interestingly enough, some people with mental illness use to self-medicate, in an attempt to alleviate their symptoms.

I have to disclose that I'm friends with members of Bigger Thomas--and I'm also in a group with few of them (Rude Boy George)--but that doesn't prevent me from digging (and praising!) their awesome version of The Beat's Jam-like "Sole Salvation" (key lyrics: "Make a cross/Make amends/Set the record straight/We’ve never said/the only things we should have ever/Bothered saying/Let's write out a list of things we need/Let's strike a brand new deal/That’s strong for any man/But has a woman's understanding in it/and then finish!/Just stop, when you feel like saying/“Have a heart, but don’t take mine”/Try a new dance “The Tolerance”/It just might be our sole salvation"). With guest vocalist Jenny Whiskey of the Hub City Stompers nicely augmenting their sound (appropriately so, since the song is about a man and a woman figuring out how to make their relationship work/last), Bigger Thomas brings this track fully into the ska fold, from The Beat album with the least amount of ska on it, and adds a spectacular New Wave-like outro.

The latest word from Paul Willo and the Specialized camp is that Madness will be the focus of the next benefit CD...

Wondering whether you know who do other musicians of The Spritely Allstars are?