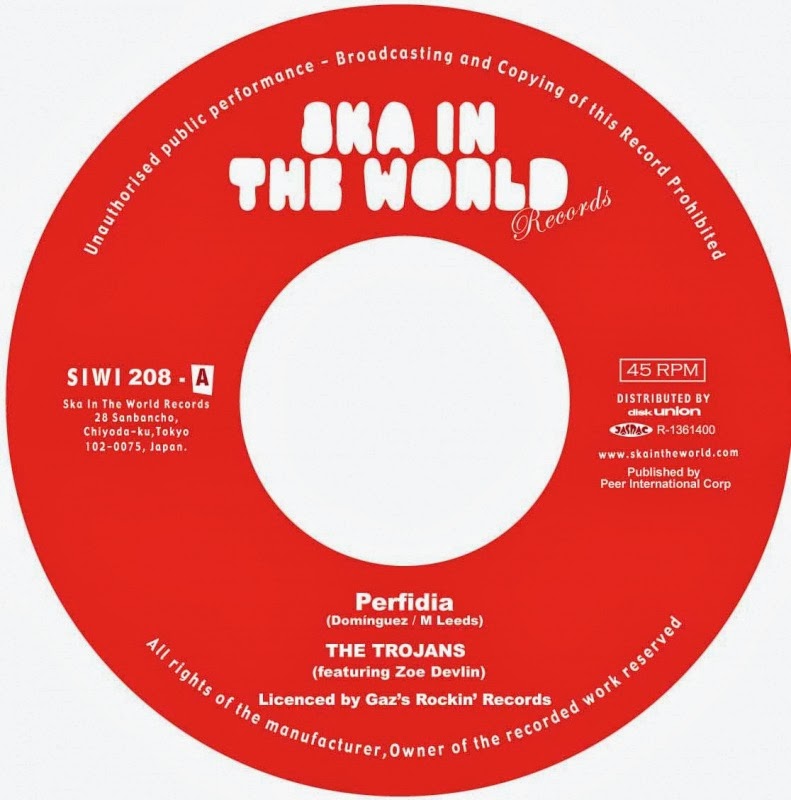 These two singles released in conjunction with The Trojans' brilliant new album Smash It, their first new record since Desiderata in 1998, find the band in incredibly fine form (check out this great interview with Trojans front man Gaz Mayall in Reggae Steady Ska to see what he's been up to all these years). While they stayed out of the studio for the first decade of the new millennium after being very active in the late 80s and throughout the 90s (a pity, really--their unique brand of Celtic/eclectic ska and reggae has been very much missed), The Trojans have been quite active, most notably performing on the Gaz's Rockin' Blues stage at the annual Notting Hill Carnival in London and Gaz himself has been busy keeping his Gaz's Rockin' Blues night going (read a review of his book about his regular club night, the history of Gaz's Rockin' Records and how it helped jumpstart the UK ska scene after the flame-out of 2 Tone, and the genesis of The Trojans here).


Singer Zoe Devlin--who recorded Smash It prior to becoming a contestant on the UK's X Factor show last fall (she didn't win), which caused her to miss The Trojans' tour of Japan, so her friend Hollie Cook took over vocal duties--is featured on this very fine cover of Albert Dominguez's pop standard "Perfidia" (faithless, treacherous, or false in Spanish), which has been recorded by everyone from Xavier Cugat, Desi Arnaz, Mel Torme, Perez Prado, and Nat King Cole to Laurel Aitken, Phyllis Dillon, and Ocean 11. From what I've read online, it seems like Devlin's future with The Trojans is in question--a shame, since she has a wonderfully expressive alto voice that brings a lot of color and character to the band (that already has a lot of these qualities).

The superb, penny-whistle driven Gaelic romp "Misogyny" decries the second-class status of women in much of the Muslim world (honor killings, etc.): "Misogyny, misogyny, the girls don't stand a chance/These medieval attitudes will have to change at once/Misogynist, misogynist, give the girls a chance/with chivalry and equal rights/and let the ladies dance!" To his great credit, Gaz has always been very outspoken about social and economic injustice, as well as environmental issues, and his lyrics on this cut are certainly one of his finest moments.

While the other three tracks on these two singles are included on Smash It, this sultry cover of Phyllis Dillon's heartbreakingly honest "Love Is All I Had" is a non-album cut and well worth tracking down by Trojans' completists and ska/rocksteady fans alike. Written by the The Trojans' bagpiper Anton O'Doherty, the jaunty, knees-up instrumental track "Bertie's Rhino" is another stellar example of their contagious good times Celtic ska. I dare you to put this on and successfully resist the urge to move at least some part of your body to this tune!

As great as these singles are (and they are terrific!), the rest of the songs on Smash It are their equals or better, so make sure to track down a copy of the CD or LP to hear what just might have been the best traditional ska record of 2013.