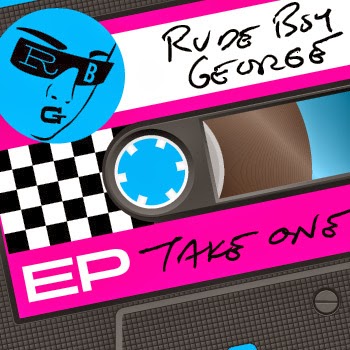 This is another post solely concerned with shameless self-promotion--but I don't feel too bad about it, as what we've got here really delivers the goods.

Rude Boy George, the band I'm in, just dropped its debut digital EP called Take One, which is available to preview and download through Bandcamp, CD Baby, iTunes, and many other digital music sites. In addition, you can listen to our tracks on Spotify and Xbox (while you virtually shoot things up).

Our first NYC-area gig of 2014 is on Thursday, February 6 at The Grand Victory in Brooklyn with Beat Brigade, The Ladrones, and Sweet Lucy. So, if you're around, definitely check us out--it's going to be an amazing night of music (our friends Beat Brigade and The Ladrones are both fantastic live!). We've got a bunch of new songs in the set, plus we seem to be expanding in all sorts of cool ways. Look for more live dates soon, both in and beyond New York City. And there will be more recorded music coming from us in 2014--some of which may be available on vinyl with your help (hint, hint)!

To watch videos of Rude Boy George in action, go to the Duff Guide to Ska YouTube channel.

Here's band's bio and some information about this release...

Rude Boy George (www.rudeboygeorge.com) is a NYC-based band that performs ska, rocksteady, and reggae versions of New Wave classics. We’re motivated by our shared love and respect for ska (reflected in the reference to 1960s and 2 Tone rude boys) and the extraordinary amount of good music produced in the late 70s and early 80s New Wave/post-punk era (Boy George). And we want to have some fun doing it. That's Rude Boy George’s agenda and mission statement--simple as that.

In May 2013, Rude Boy George recorded three tracks at Bill Laswell’s studio in West Orange, NJ with ex-General Public/Special Beat/English Beat bassist Wayne “Waylo” Lothian producing. The result is our five-track digital EP Take One (with "(Keep Feeling) Fascination," "Don't Change," and "Talking in Your Sleep"--plus two remixes including one featuring Antonee First Class of The English Beat). Plans already are in the works to lay down more tracks in the studio--to be issued in 2014 on a more tangible format.