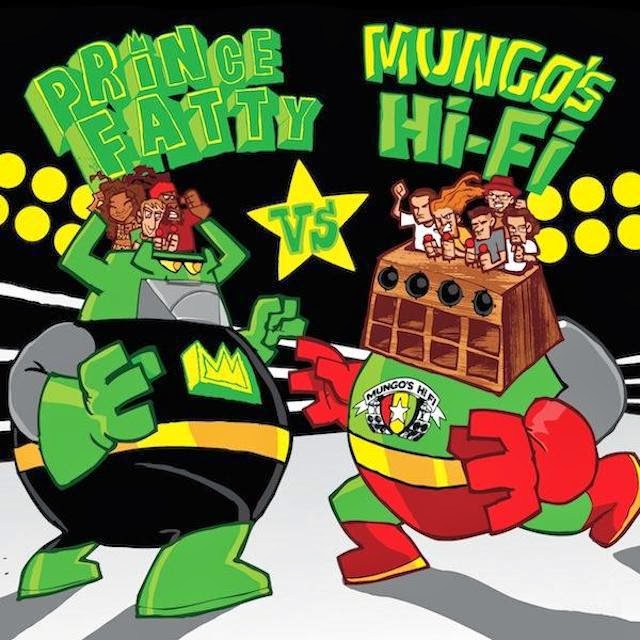 If you're wondering whether or not to pick up the new Prince Fatty vs. Mungo's Hi-Fi soundclash album featuring what have to be the two best reggae producers/collectives/sound systems today, it's a no-brainer--this is unquestionably one of the top reggae releases of 2014. Yes, all of the songs from both crews have been previously released--but the raw material used here is incredibly good (Mungo's Hi-Fi tracks come from their albums Sound System Champions from 2008 and their Forward Ever from 2011 and feature Sugar Minott, Top Cat, Soom T and Marina P, while the Prince Fatty cuts are from various releases featuring Hollie Cook, Winston Francis, Horseman, and The Pioneers' George Dekker--most notably Cook's debut album, Prince Fatty's Supersize, and Prince Fatty Versus the Drunken Gambler) and what each producer does with their allotment of tracks is nothing short of phenomenal.

The brilliant twist here is that Prince Fatty and Mungo's Hi-Fi have versioned each other's songs in their own particular style--and both, in many ways, have improved upon (and not merely re-fashioned) the other's work. I'm a bit embarrassed not to know the Scottish (!) sound system Mungo's Hi-Fi better; I had to look up samples of the original tracks in order to be able to compare them to Prince Fatty's versions. But, I discovered that the Mungo's Hi-Fi source tracks vary between loose, late-70s roots reggae to early, computer-y dancehall. In Prince Fatty's hands, everything is tightened and revved-up, and given a full, rich, warm aural sheen. I particularly liked Prince Fatty's versions of "Herbalist" (with Top Cat), "Scrub a Dub Style" (with the great, late Sugar Minott and Horseman), and "Under Arrest" (with MC Ishu)--which features the terrific lyric, "Hands up a Babylon/You're under arrest!/Selassie are ya victim/Haile Haile the best!" that turn these driving-while-black/stop-and-frisk times on their head.

Mungo's Hi-Fi take Prince Fatty's highly polished tracks and bring them back to the future of early 80s Prince Jammy-style dancehall. Since I'm very familiar with all of the Prince Fatty songs here, I particularly appreciate and love their transformation via Mungo's Hi-Fi imagination in the control room. Hollie Cook's haunting "Sugar Water" (one of my favorite songs ever) now floats above a fantastic propulsive bass and drum track, George Dekker's "Say What You're Saying" sports these Inspector Gadget-like keyboard lines, and Winston Francis' "Dry Your Tears," and Horseman's "Horsemove" receive equally as cool and inventive treatments.

Fans of both Prince Fatty and Mungo's Hi-Fi are really going to dig this album--but even if you've never heard a track from either group, this is an essential purchase for all fans of ska, roots reggae, dub, and dancehall.

If we're lucky, the gods of music will permit/facilitate another collaboration like this between Prince Fatty and Mungo's Hi-Fi in the near future...