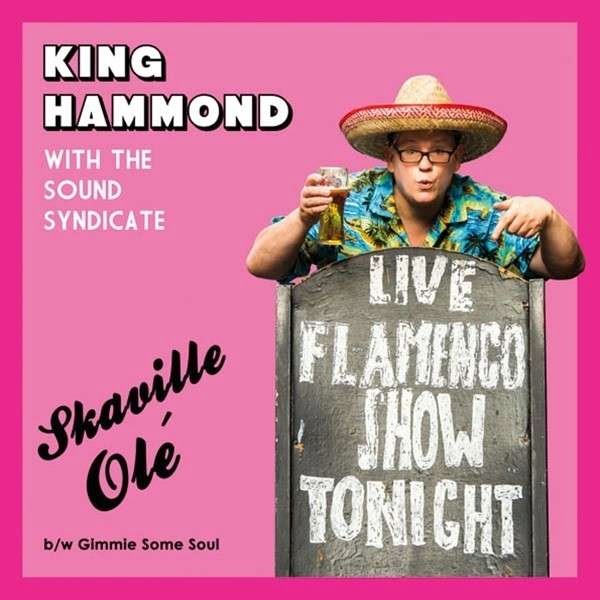 With the typical cheekiness and aplomb that I absolutely love and expect from the great King Hammond (AKA Nick Welsh) comes his latest single "Skaville Ole," recorded with the Sound Syndicate. This cut reclaims the first big hit he wrote for Bad Manners way back in 1989 ("Skaville UK") and refashions it (a bit) for the Spanish ska market (Liquidator is based in Madrid; the Sound Syndicate are KH's backing band whenever he tours Spain). While this version contains little actual Spanish language, it does sport all sorts of signature King Hammond touches (the space-age keyboard sounds and Hammond organ found on his 1989 debut, Revolution '70)--with his irrepressible vocals riding atop the musical stampede (at the end of the track you hear Nick say, "Man, you guys just nailed the late '80s King Hammond sound!"). It's all pretty fantastic!

In keeping with 80s ska sounds, "Gimme Some Soul" is a sweet new 2 Tone-ish ska track credited both to King Hammond and the Sound Syndicate. As might be expected, KH needs something real and true along with a piece of her heart. King Hammond obsessives must have this single--but ska fans of every stripe should support the King and Co. and pick up this great piece of wax.

King Hammond fans take note: The word from our friends Bim Skala Bim is that King Hammond will be doing a bunch of dates with them this coming August (8/14: Middle East in Cambridge, MA; 8/15: Wellfleet Beachcomber, Wellfleet, Cape Cod, MA; August 17: Manchester 65 in Providence, RI; and more!). So, if you're going to be anywhere in the Northeast USA this summer, make sure to catch two of the best ska acts around!