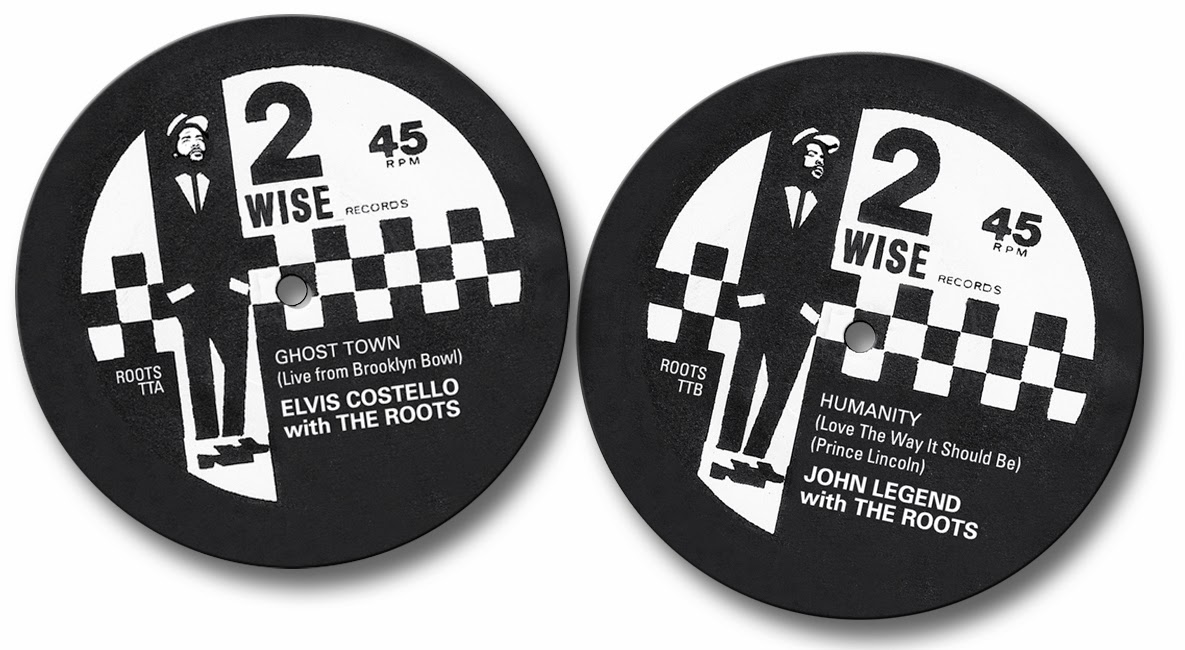 Side A of the latest installment of the Ska Boots series captures a spectacular live cover of The Specials' incendiary swan song/#1 UK hit "Ghost Town" by Elvis Costello and The Roots. This particular recording comes by way of a performance EC and The Roots gave at Brooklyn Bowl in September of 2013, in support of their Wise Up Ghost collaboration (see a video of their cover of "Ghost Town" below). Of course, as every 2 Tone fan knows, Elvis produced The Specials' debut LP in 1979 and The Special AKA's "Free Nelson Mandela" in 1984--and Questlove of The Roots has an omnivore's knowledge of all things musical--plus The Roots are probably one of the best and most versatile groups around (hip hop or otherwise), fluent in just about every pop musical genre in existence. So, as to be expected, the results here are spectacular and beautifully convey the dread, anger, and desperation of the track and those times.

I really need to become much more familiar with The Roots' discography, as I was completely unaware of their sweet cover of Prince Lincoln and The Royal Rasses' soulful roots reggae cut "Humanity (Love the Way It Should Be)" with John Legend from their collaborative studio album Wake Up! (which was released in 2010 and features "soulful music from the 60′s and 70′s all with an underlying theme of awareness, engagement and consciousness"--all inspired by the election of President Barak Obama, our nation's first black president, in 2008). And this beautiful song contains some wonderful and still highly relevant lyrics: "Life is gettin’ harder and harder/More and more each day, yeah/Still, I am determined that I'm never gonna change my way/Thinking about love the way it should be/You gotta open your eyes and you will see/About love the way it should be/You gotta make up your minds and you’ll advance humanity." (I have to admit that I can imagine the president thinking these very thoughts as he tries to deal with all of the people in our government and our nation opposed to his every move--not because of his policies--but because of the color of his skin.)

Props to the Ska Boots designer who altered the Peter Tosh-based Walt Jabsco to look like Questlove on the Side A of the faux 2 Tone paper label and John Legend on the B side. It's a very nice touch on a very cool--and very socially aware--release.