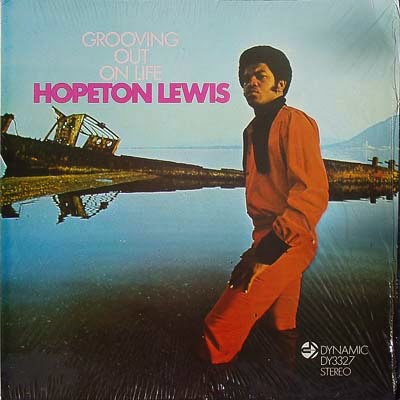 The Jamaica Observer is reporting that rocksteady great Hopeton Lewis passed away at age 66 yesterday (9/4/14) at his home in Brooklyn, NY.

Lewis is credited with recording (backed by Lynn Taitt and the Jets) what many consider to be the first rocksteady cut, "Take It Easy," at Ken Khouri's Federal Records studio and released on Merritone in late 1966. This smash hit was quickly followed by an album of the same name issued in 1967, containing some of the rocksteady era's top tracks, including "Sounds and Pressure," "Rock Steady," "Music Got Soul," and (according to "Reggae: The Rough Guide"), the first 'herb' song ever recorded in Jamaica, "Cool Collie." (Island Records released many of these songs and more--including one of my faves, "Rock-a-shaka"--as singles in the UK in 1967--some of Lewis's songs were so popular with the late 60s mods and skinheads that Prince Buster covered two of Lewis' tracks--"Take It Easy" and "Sounds and Pressure" while on tour in England the same year and which were documented on the Blue Beat Prince Buster On Tour album.)

Lewis also won the 1970 Jamaica Song Festival with the Duke Reid-produced "Boom Shaka Lacka" (Treasure Isle) and scored another big seller in 1971 with "Grooving Out on Life" (Duke Records/Pama), backed by Byron Lee and the Dragonaires. Lewis continued his partnership with Byron Lee, releasing two albums, 1973's Grooving Out on Life (Dynamic Sounds/Trojan) and 1974's Dynamic Hopeton Lewis (Dynamic Sounds). However, according to "The Virgin Encyclopedia of Reggae," "the songs proved to be too lightweight for the reggae audience and he similarly failed to cross over into the mainstream."

In the 1980s, according to the Jamaica Observer, Lewis "turned his back on secular music" and became deeply involved in gospel music in New York City. According to his biography on his website, "in 1996, Lewis released his debut gospel CD, This is Gospel and he has since released twelve other gospel CDs." Lewis was founder and president of the Songs for 4Life Ministry, which is "a gospel music production, marketing, and promotions ministry." This ministry includes The Hopeton Lewis Caribbean Gospel Music Awards USA and the Caribbean Gospel Jubilee (CGJ) internet radio station.

Our sincere condolences go out to Hopeton Lewis' family, friends, and colleagues.

Heather Augustyn has a nice tribute to Lewis on her Foundation SKA blog.