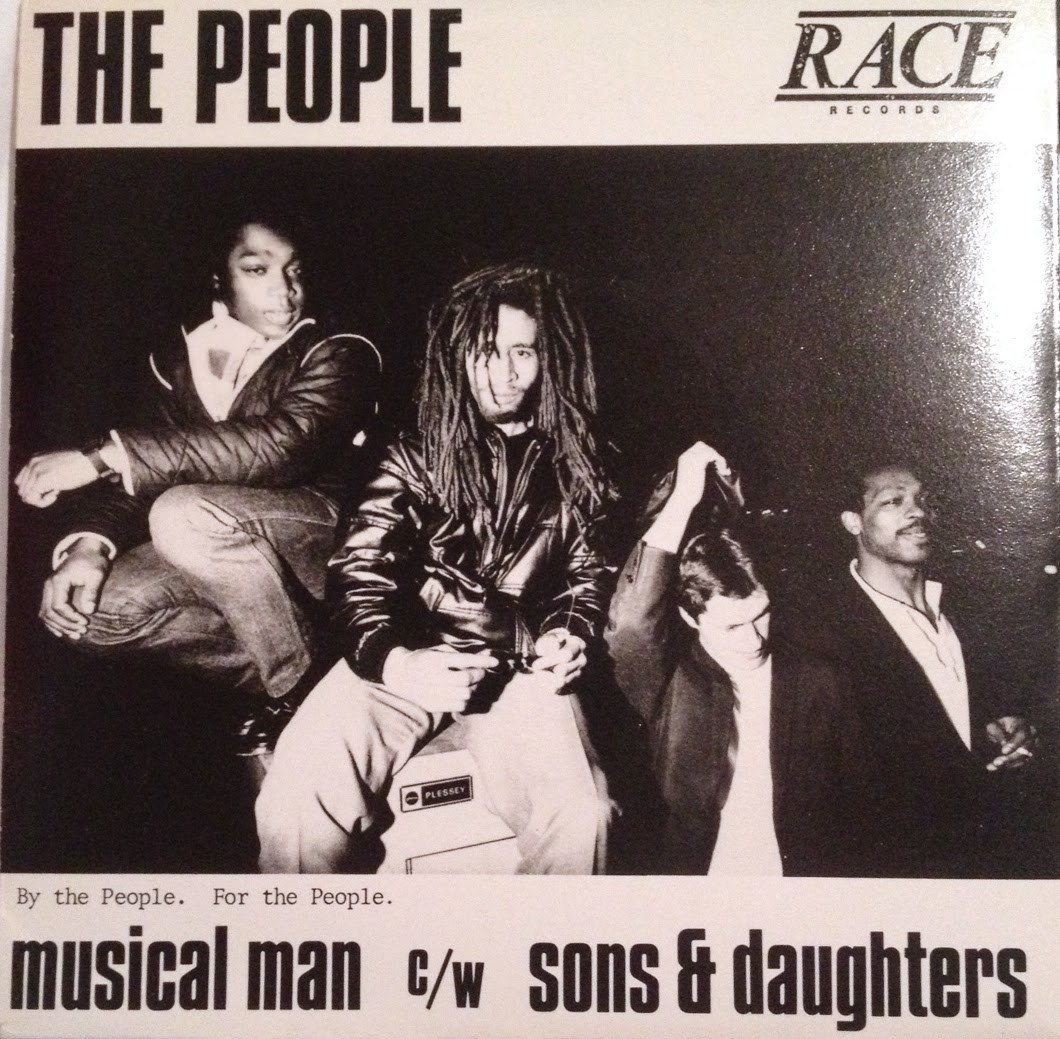 After re-reading sections of Paul "Willo" Williams' essential "You're Wondering Now: The Specials from Conception to Reunion" this past August while on holiday, I came across a passage about Specials' drummer John Bradbury's short-lived label Race Records that he ran with Sean Carasov, who was the manager for the all female punk band the Mo-dettes, as well as a roadie and merch guy for The Specials. One of the acts on Race Records that caught my attention was The People, which featured ex-Selecter members Charlie Anderson and Desmond Brown, who had left The Selecter before the recording of Celebrate the Bullet (according to a 2009 interview with Marco on the Bass, Anderson "didn't think it was the right direction for the band"), as well as Chris Christie, who had been in the Coventry reggae band Hard Top 22 in 1977 with Anderson and Brown (along with several other members of The Selecter), and John Hobley from another Coventry band, God's Toys. The People's sole release was a 1981 single: "Musical Man" b/w "Sons and Daughters."

I was intrigued, so I looked up the A side "Musical Man" on YouTube and really liked its reggae/rock sound, which--ironically--wouldn't have been out of place on The Selecter's Celebrate the Bullet--compare the (slightly psychedelic) reggae of "Musical Man" with "Selling Out Your Future." So, I decided to try to track a copy of the single down on the internet. As luck would have it, I was able to purchase a near mint copy of the single for not too terrible a price and am psyched to have this somewhat rare release in my collection. 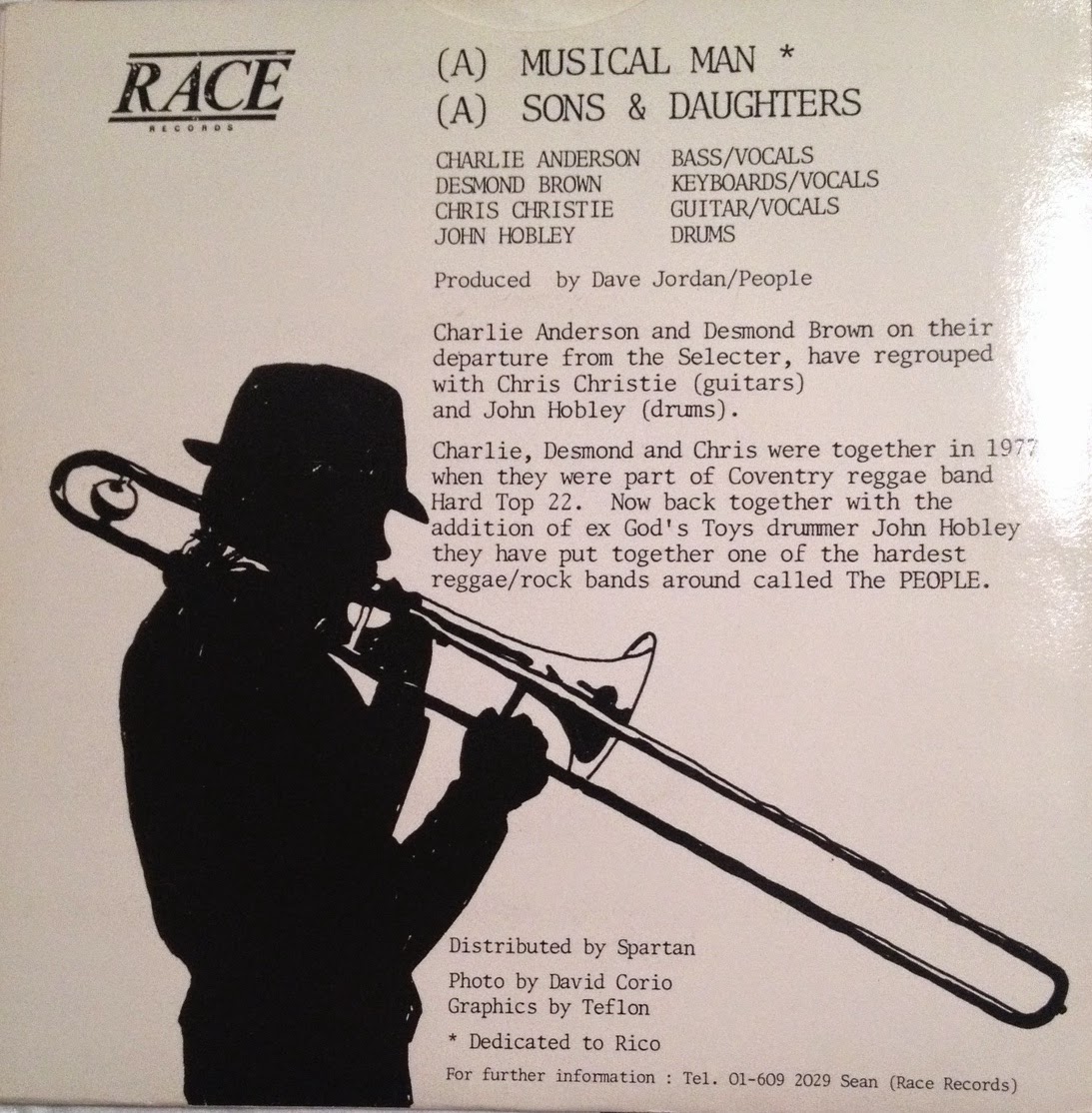 In addition to the fantastic songs, what makes The People's single particularly compelling is that it's clearly a 2 Tone affair (even if The People's sound isn't). Specials' engineer/producer Dave Jordan produced it (and according to Anderson, Lynval Golding was also involved, though he is uncredited on the release), John "Teflon" Sims designed the artwork (and the illustration on the back of The People's single--the A side is a tribute to Rico--is reprised and further developed for Rico and The Special AKA's "Jungle Music" single picture sleeve, which was issued in 1982), and it was released on Bradbury's imprint (he had set it up as a "musicians' label," according to Paul Williams, lending each band the money to record their music, recouping his loan on sales, and if the release went bust, he forgave the band's debt).

As previously mentioned, "Musical Man" was dedicated to Rico and his musical brilliance and perseverance:

"Sons and Daughters" is terrific, hard-hitting, socially conscious track (with a bass line reminiscent of The Police's "The Bed's Too Big Without You") and very much in the 2 Tone vein of speaking out about socio-economic and racial injustice:

"I think about my sons and daughters
I start to think about their future
Why they make it just hating
down here?

But we've got to carry on
Yes, we've got to laugh it off
We love our sons and daughters
And we're thinking about their future"

From the vantage point of several decades on, I find both of these track to be pretty great and am somewhat puzzled as to why this release didn't fare better. Certainly, fans of UB40 would have found much to like in The People's sound. But the close association with The Selecter and 2 Tone must have put fans of both off when they discovered that The People didn't deliver a Specials/Selecter-like ska sound. It's a shame that The People didn't forge on--despite the changing UK pop tastes at the beginning of the 1980s--they had a very good thing going...