"Be Stiff: The Stiff Records Story" 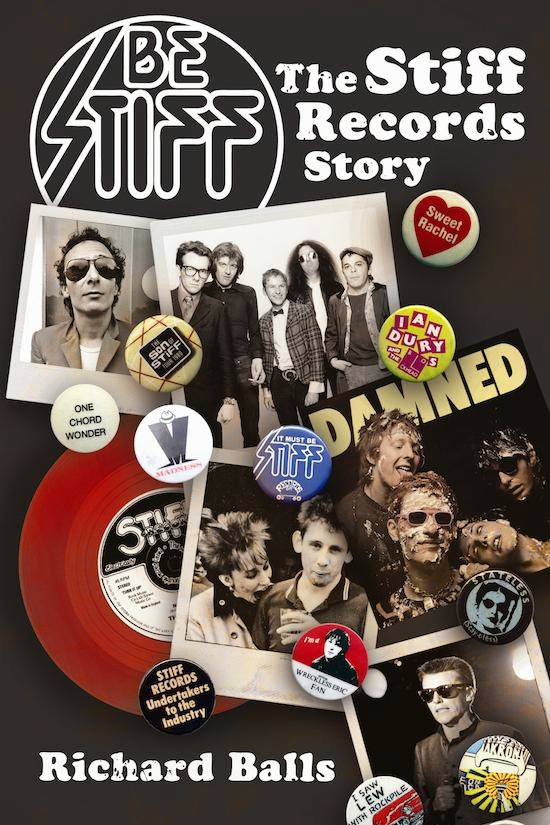 As someone who worked at a pretty unconventional indie record label in the 1990s and is completely obsessed with 1980s new wave music, I gleefully devoured Richard Balls' (how's that for a punk rock name, intentional or not?) terrific "Be Stiff: The Stiff Records Story."  This book recounts the rise and fall (1976-1985) of this boldly unorthodox label founded by pub act managers Jake Rivera and Dave Robinson, both of whom were motivated to start Stiff by their frustration at the majors' maddening refusal/inability to recognize and develop some of the amazing talent in the nascent punk and new wave scenes. Stiff's roster included The Damned ("New Rose" is considered to be the first punk single ever released), Elvis Costello, Nick Lowe, Ian Dury and the Blockheads, Wreckless Eric, Lene Lovich, Richard Hell and the Voidoids, The Adverts, The Belle Stars, Tenpole Tudor, Tracey Ullman, The Pogues, Devo, Kirsty MacColl, Dave Edmunds, Graham Parker and the Rumor, The Members, Motorhead, Dirty Looks (power pop from Staten Island, NY!), Rachel Sweet, the Plasmatics, Yello, and many more. And the label was celebrated for its innovative and cheeky marketing campaigns for releases and package tours; releases aimed at collectors (several versions of a single issued on different colored wax; the use of picture sleeves; and limited-edition runs of 45s); pre-MTV music videos; as well as often extraordinary graphic design, the bar set very high by the incredible Barney Bubbles (who also has a big ska connection--he directed video for The Specials' "Ghost Town").

What should be of great interest to ska fans is that Stiff was also home to Madness (whose incredible string of fourteen UK top ten singles helped keep the label afloat in some lean times), Desmond Dekker, The Equators, and The Untouchables. While there's some great info about Madness' and Desmond Dekker's experience with Stiff in these pages, The Equators and The Untouchables, in particular, get disappointingly short shrift here (not much more than a mention that The Untouchables' Stiff releases came out just as the label was failing). Admittedly, "Be Stiff" has a lot of territory to cover--the label released hundreds of singles, mostly one-off deals, and a little over a hundred albums, including the brilliant The Wit and Wisdom of Ronald Reagan (released just before the Gipper's election in 1980), which consisted of 40 minutes of complete silence and sold 40,000 copies--but The Untouchables hit it big in both the UK and Europe and I would have loved to learn more about how their classic Wild Child album came about...

Here are some choice bits and pieces from "Be Stiff" for the ska crowd:

Dave Robinson hired Madness to perform at his wedding essentially as an audition for the label, since he had heard a lot of great things about the band--who had only played their first gig a few months earlier--but had been unable to arrange to see them live. What helped seal the deal--according to Madness bassist Mark "Bedders" Bedford--was Elvis Costello's reaction to Madness' set: "...Dave [Robinson] said, 'I couldn't believe it. If Elvis Costello is dancing then you must be doing something right.'" Madness' dressing room at Robinson's wedding featured black and white square carpeting--something they noted at the time and returned to for the "Bed and Breakfast Man" video shoot after they had signed to Stiff.

The Equators--an all-black Birmingham ska band that formed in 1977, two years before 2 Tone--were featured on the 1980 "Son of Stiff" package tour in the UK and released the truly excellent Hot in 1981, which did not have much chart success (the album came out just as 2 Tone was flaming out and The Equators' sound may have been a bit too polished and rock/jazz/pop influenced for what was expected by 2 Tone fans at the time; though give it a listen now and you'll be left scratching your head to as why it wasn't a massive hit). Soon after forming The Beat, Dave Wakeling is quoted in "Be Stiff" as saying, "...just when we thought we'd discovered something new, we discovered The Equators right in our home town of Birmingham, who had already come up with a similar formation..."  As for why The Equators went with Stiff instead of the more natural fit of 2 Tone, Equators' singer Donald Bailey stated, "We thought, 'Hey, we were playing this music before the 2 Tone thing came out. Why give it to 2 Tone?'"

Hoping to capitalize on 2 Tone's enormous success--and Desmond Dekker's previous UK chart hits from 1967 to 1970 with "007," the #1 hit "Israelites," "It Mek," and "You Can Get It If You Really Want It"--Robinson arranged for the King of Ska to release two albums, Black and Dekker (recorded with Graham Parker's Rumours, The Equators, and the Akrylykz backing him and featuring good-to-great new recordings of many of his previous hits; 1980) and Compass Point (produced by Robert "Addicted to Love" Palmer and apparently a complete mess; released in 1981). Neither of these albums nor a slew of singles managed to return Dekker to the charts (last summer, I picked up his cover of The Heptones' "Book of Rules," released in 1982 on Stiff and it's pretty fantastic).

Lastly, if you check out Stiff's discography in the back of the book, you'll note that Stiff licensed and released The Potato 5's first 7" single ("Western Special" b/w "Big City") from Gaz's Rockin' Records (but Stiff's closing shop prevented further deals, forcing Gaz to get his label up-and-running on his own).